On the economic front, Germany’s seasonally adjusted industrial production unexpectedly eased 1.6% on a monthly basis in February, defying market expectations for an advance of 0.2% and dropping by the most in more than 2 years. Industrial production had declined 0.1% in the previous month. Further, the nation’s Markit construction PMI fell to a level of 47.0 in March, contracting for the first time in more than 3 years. The PMI had registered a reading of 52.7 in the preceding month.

The US Dollar declined against a basket of major currencies on Friday, after data indicated that the US economy created the fewest jobs in six months in March.

Non-farm payrolls in the US climbed by 102.0K in March, rising at its weakest pace in 6 months, suggesting that job creation slowed markedly after jumping by a revised 326.0K in the previous month. Investors had envisaged non-farm payrolls to rise by 185.0K. Nevertheless, the nation’s average hourly earnings of all employees registered a rise of 0.3% on a monthly basis in March, in line with market expectations. In the previous month, average hourly earnings of all employees had climbed 0.1%. Additionally, the nation’s unemployment rate remained steady at a 17-year low level of 4.1% in March, confounding market consensus for a fall to 4.0%.

Separately, the Federal Reserve (Fed) Chairman, Jerome Powell, reiterated his upbeat views on the US economy and added that the central bank would likely continue its gradual pace of interest rate hikes to keep inflation in check.

Moving ahead, investors would focus on the Euro-zone’s Sentix investor confidence index for April as well as Germany’s trade balance data for February, both due to release in a few hours. 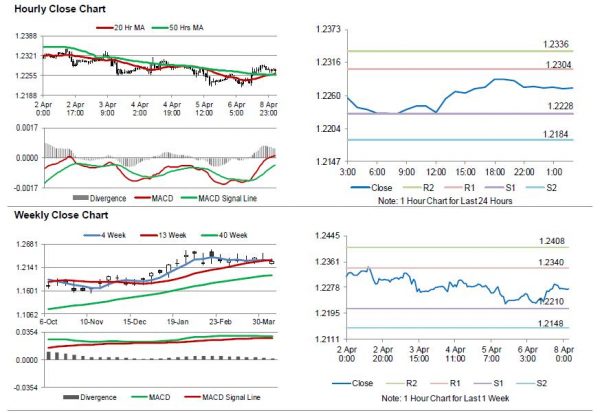