The pound was one of the best performing currencies against the US dollar in the first three months of 2018. But as the British currency basks in the growing optimism about the prospect of a favourable post-Brexit trade deal with the European Union, the renewed strength may not be good news for UK exporters, with early indications pointing to slowing manufacturing growth in the first quarter. The Office for National Statistics will publish its latest figures on industrial and manufacturing production on Wednesday, along with monthly trade numbers.

Industrial output is forecast to rise by 0.4% month-on-month in February, down from 1.3% in the prior period. On an annual basis, growth of total production industries is expected to accelerate to 2.9% from 1.6% in January. Looking at the biggest component of industrial production, manufacturing output is expected to expand by 0.2% m/m in February. The 12-month rate is forecast to pick up to 3.3%. 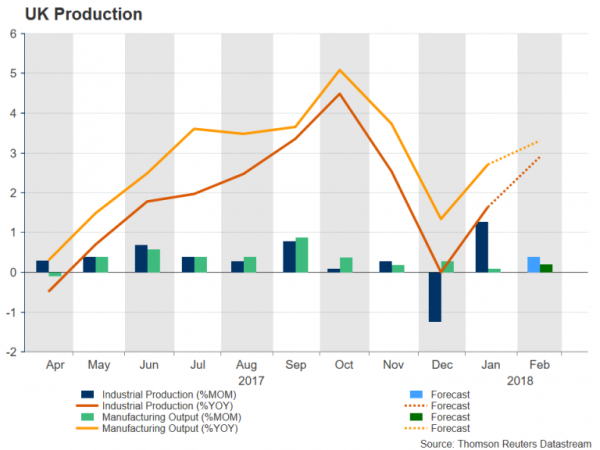 The manufacturing sector is on track to record its 10th straight month of growth in February and is enjoying its longest period of expansion since the late 1960s. However, month-on-month growth has been averaging just 0.2% since November and is lagging its European peers. While uncertainty relating to Brexit remains a significant weight on the sector, its performance is nonetheless unimpressive given the sharp depreciation of the pound after the Brexit referendum and the strong upturn in global growth during 2017.

The absence of a stronger recovery in manufacturing and export growth raises concerns about the sustainability of Britain’s massive trade deficit, which has been steadily deteriorating since the late 1990s. (The UK current account deficit hit a record 5.8% of GDP in 2016). Trade figures due on Wednesday are expected to show only a small reduction in the trade deficit in February, from £12.33 billion for £11.95 billion.

With market odds of a rate hike by the Bank of England in May running over 80%, it would require a significant miss in the data for traders to sharply sell off the pound, especially as technical indicators suggest the pound/dollar rally of the past three trading sessions is not yet looking particularly overstretched. However, in the event of a negative surprise in the data, cable could dip towards $1.4125, while bigger losses would see a test of $1.41 level before the 50-day moving average would come into view around $1.4065.

But should the data beat expectations, the pound may gain further upside momentum and eye the $1.42 handle. A break above this level could could see sterling struggle to overcome resistance at $1.4245 and $1.4280.