FOREX: The US dollar index traded practically unchanged on Thursday, with the currency unable to draw much support from the hawkish signals in the FOMC minutes, amid escalating tensions in the Middle East pushing US Treasury yields lower.

STOCKS: US markets closed lower yesterday, weighed on both by the optimistic tone of the FOMC minutes and rising geopolitical tensions, with the US-Russia standoff over Syria dominating headlines. The Dow Jones led the charge lower, shedding 0.9% of its value, while the S&P 500 and the Nasdaq Composite fell by 0.55% and 0.36% respectively. Nonetheless, futures tracking the Dow, S&P, and Nasdaq 100 are all pointing to a slightly higher open today. Risk aversion spread to Asia as well, with Japan’s Nikkei 225 and Topix declining by 0.1% and 0.4% correspondingly. In Hong Kong, the Hang Seng tumbled by 0.8%. In Europe, futures tracking all the major indices were flashing red as well.

COMMODITIES: Oil prices soared yesterday, with both WTI and Brent reaching fresh 3-year highs, as rising tensions in Syria were seen as threatening to disrupt oil production in the broader Middle East. Both WTI and Brent are higher today as well, by 0.55% and 0.4% respectively, with investors overlooking the larger-than-anticipated build in US crude stockpiles reported yesterday by the EIA, in the face of geopolitical risks. In precious metals, gold is 0.15% lower today, giving back some of the extraordinary gains it posted yesterday as investors sought safety. Prices surged to reach the $1365/ounce level, just shy of the 2017 high at $1366, before pulling back. Developments on the geopolitical front, particularly in Syria, will likely continue to dominate price action in the near-term. 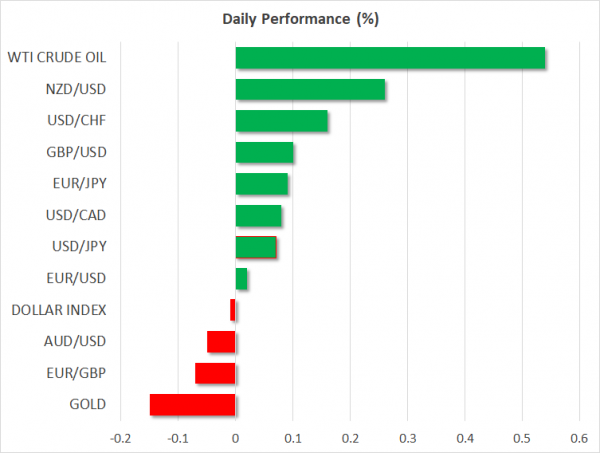 Risk appetite faltered once again yesterday, this time due to rising tensions in the Middle East. The initial wave of risk aversion was triggered by hostile rhetoric between Russia and the US, with the former threatening to shoot down any missiles the US fires into Syria, and US President Trump responding via Twitter that missiles “will be coming”.

While the US President tried to water down his remarks in subsequent tweets, the increasing risk of a standoff between two of the world’s superpowers continued to sap appetite for risk, leading investors to seek the safety of assets like gold and the yen. Gold prices in particular surged notably, coming just shy of touching their 2017 highs. Oil prices also soared reaching fresh three-year highs, seemingly on speculation that tensions could have spillover effects to other neighboring countries and disrupt oil production. Some reports of missiles flying over Saudi Arabia likely aided this narrative.

In economics, the minutes of the March FOMC meeting painted the picture of a Committee that is becoming increasingly more confident. “All” participants agreed that the economy would likely pick up steam soon and inflation will move higher in the coming months. Moreover, “several” officials judged the appropriate path for interest rates would likely be slightly steeper than they previously expected over the next years, in light of the improving backdrop. Overall, the hawkish signals helped the dollar to recover earlier losses and finish the day nearly unchanged.

In the commodity-linked currencies, kiwi/dollar is 0.25% higher today, aided by data overnight showing that consumer spending in New Zealand is picking up. Both the Aussie and the loonie were lower against the greenback, but by less than 0.1%. The loonie gained yesterday though, amid rising oil prices and media reports that the top NAFTA negotiators plan to meet this week and push for a preliminary deal.

In emerging markets, the Turkish lira touched a fresh record low against both the dollar and the euro yesterday. Besides Turkey’s large current account deficit, the lira is also pressured by speculation that the nation’s central bank is unwilling to raise rates in order to curb high inflation and defend the currency.

Day ahead: ECB minutes, eurozone industrial production and US jobless claims on the horizon

Inflation numbers out of Sweden due out at 0730 GMT will bring krona pairs into the limelight.

At 1130 GMT, the attention will turn to euro pairs as the European Central Bank publishes the official record pertaining to the monetary policy meeting held on March 7-8. A hawkish tilt in policymakers’ views is anticipated to provide a lift to the common currency, with a dovish one having the opposite effect. Also of interest out of the eurozone will be industrial production figures for the month of February due earlier in the day (0900 GMT). Those are expected to reflect an improvement on both a monthly and a yearly basis.

Initial and continued jobless claims for the week ending April 7, as well as data on import & export prices for the month of March, will be generating interest out of the US; they’re all scheduled for release at 1230 GMT.

Policymakers delivering remarks include ECB Vice President Vitor Constancio who will be delivering a speech at a seminar on systemic risks and regulation commencing at 1400 GMT. Bundesbank President Jens Weidman will be talking at the same time.

Lastly, tensions are rising in Syria and the same appears to hold true for the odds of military action by Western powers. More uncertainty in the region has the capacity to shift funds to perceived safe-haven assets, such as the yen and gold, while it also has implications for oil on the back of possible supply disruptions. 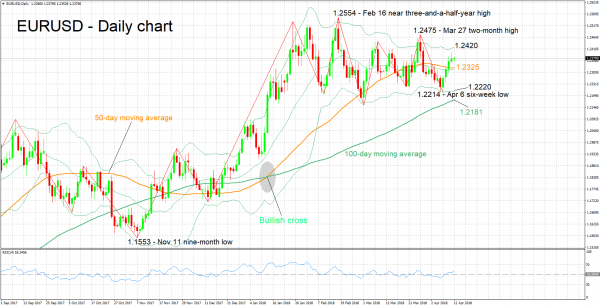 EURUSD is advancing for the fifth straight day, with the pair currently trading 25 pips below yesterday’s two-week high of 1.2395. The RSI is rising in support of a positive short-term picture for the pair, though notice that its slope is not as steep at the moment; positive momentum may be fading.

Hawkish views by ECB policymakers in today’s meeting minutes are anticipated to refuel the bullish bias, with resistance to advances possibly coming around the upper Bollinger band at 1.2420. The area around this point also includes Wednesday’s two-week high of 1.2395, as well as the 1.24 round figure. Further above, the attention would turn to 1.2475, the two-month high from late March.

A dovish take by the ECB on the other hand, is expected to lead to weakness in the pair. Support to declines might come around the current level of the 50-day moving average at 1.2325 – this is where the middle Bollinger line roughly lies as well – with steeper losses shifting the focus to the range around the lower Bollinger band at 1.2220.