Risk Trades Supported As Geopolitical Concerns Fade, US Retail Sales In The Spotlight

FOREX: The US dollar traded lower on Monday, but by less than 0.1%, showing little response to the US military strike on Syria over the weekend.

STOCKS: US markets closed lower on Friday, though they appear set for a recovery today. The Dow Jones and the Nasdaq Composite both fell by 0.5%, while the S&P 500 shed 0.3% of its value. That said, futures tracking the Dow, S&P, and Nasdaq 100 are currently pointing to a higher open today, despite news over the weekend that the US had bombed Syria. The positive sentiment is likely owed to speculation that the strike was a surgical, isolated incident, and that things will calm down from here. In Asia, Japanese markets were higher, with the Nikkei 225 and the Topix climbing by 0.26% and 0.40% respectively. In Hong Kong though, the Hang Seng tumbled by 1.6%. Meanwhile in Europe, futures tracking all the major indices were flashing green.

COMMODITIES: Oil prices fell on Monday amid signs the conflict in Syria won’t lead to a US-Russia confrontation, helping to ease concerns of supply disruptions elsewhere in the Middle East. WTI and Brent declined by 0.8% and 0.9% respectively. Should the situation in Syria indeed calm down, oil prices could remain under pressure as geopolitical risk is priced out and investors turn their sights back on US production. In this respect, the Baker Hughes rig count on Friday showed another sharp increase in active oil rigs, enhancing the narrative that US supply continues to soar. In precious metals, gold traded lower by nearly 0.2% despite the strike on Syria. The broader calmness displayed by investors is likely owed to speculation that a US-Russia face-off over Syria will be averted. 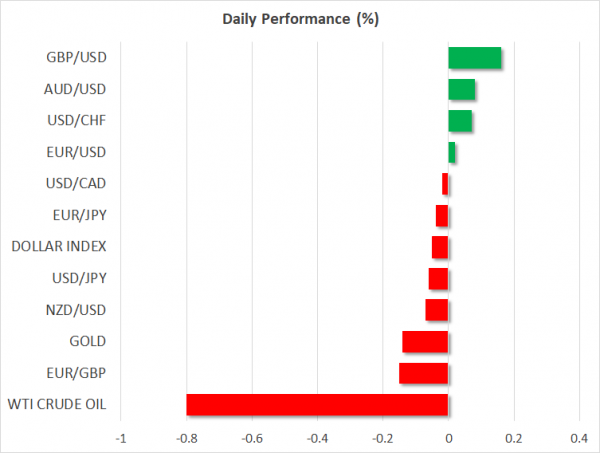 The US, the UK and France launched missiles against chemical weapons facilities in Syria on Saturday, as US President Trump had hinted recently. Interestingly though, the market response was very limited as traders returned to their desks on Monday. Safe havens were mixed, with the yen trading marginally higher, but gold being 0.2% lower. Meanwhile, US stock futures were flashing green, suggesting the major indices could open higher today, showing no signs of geopolitical stress.

The muted reaction is probably owed to expectations the situation won’t escalate any further. Recall that last week, the risk-off market moves occurred after Russia said it will shoot down any US missiles fired at Syria, generating concerns of a US-Russia military standoff. However, once the strike was over on Sunday, both the US and the UK send clear signals this was a ‘one and done’ attack, and not the beginning of a prolonged operation, easing fears of an imminent conflict with Russia. US President Trump tweeted ‘Mission accomplished’, while UK Foreign Secretary Boris Johnson said his nation is not seeking escalation, and that the mission’s purpose was to ‘send a message’.

Even though things appear somewhat rosy at the moment, risk sentiment is not ‘out of the woods’ just yet. Russia has yet to respond to the Syrian strike, while the US Treasury is reportedly preparing to unveil new sanctions against Moscow today. More importantly, the US-China trade spat may be set to get a new chapter. Recent media reports suggest the White House will unveil a fresh round of tariffs against China this week. If so, China will most likely hit back with its own countermeasures, perhaps triggering another wave of risk aversion over the next days. Even if that is the case though, the broader narrative that the situation may be finally resolved through talks would not necessarily be derailed.

Elsewhere, moves in the FX market were fairly muted. Both the euro and the pound were marginally higher against the US dollar. Meanwhile, the antipodeans were mixed, with aussie/dollar being 0.1% higher, but kiwi/dollar nearly 0.1% lower.

Some US data will dominate Monday’s economic calendar, with retail sales being considered as the most important release of the day.

At 1230 GMT, retail sales data for the month of March out of the world’s largest economy will be made public. After three straight months of monthly declines, retail sales are projected to reflect positive growth in March, specifically to expand by 0.4% m/m. Consumption was an area of concern for Fed policymakers – this was evident in the official record of March’s meeting released last week – and it will be interesting to see whether today’s figures alleviate some of those worries. Core retail sales, which exclude items such as automobiles and are more closely aligned with the consumer spending component of GDP, will also be watched.

At the same time as retail sales numbers (1230 GMT), the US will see the release of April’s New York Fed manufacturing index as well as data on retail control for March. Afterwards (1400 GMT), February’s business inventories and April’s NAHB housing market index will be made public as well.

In equites, Bank of America and Netflix are among those corporations releasing quarterly results on Monday. Overall sentiment in stock markets could also be driven by developments on global trade, as well as the conflict in Syria – these being factors that undoubtedly have the capacity to lead to positioning in currency markets as well.

A slew of Fed speakers will be making appearances this week. Starting today, at 1400 GMT, Dallas Fed President Robert Kaplan will be participating in a Q&A session, while Minneapolis Fed President Neel Kashkari will be delivering remarks on ‘Too Big To Fail’ financial institutions; neither holds voting rights within the FOMC this year. Atlanta Fed President Raphael Bostic will be talking on the US economy and rural market trends at 1715 GMT. He is a voting member within the FOMC in 2018. 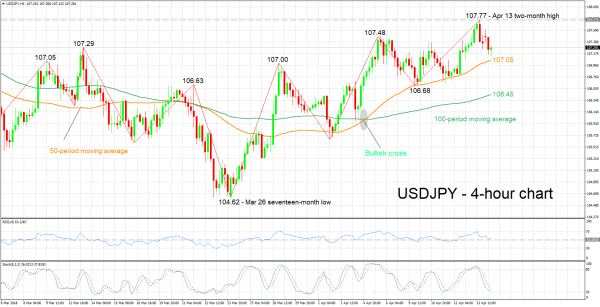 USDJPY has fallen after reaching a two-month high of 107.77 on Friday. The RSI, which gauges the short-term bias, has reversed course, heading lower after coming close to overbought territory. The stochastics are giving a mostly bearish picture in the very short-term, with the %K line below the slow %D line. However, the %K seems to be halting its decline; this could be an early sign of changing momentum in the very short-term.

Better-than-expected US retail sales data could boost USDJPY, with resistance to advances potentially coming around last week’s two-month high of 107.77 – the area around this also includes the 108 round figure. Notice that a couple of peaks from the recent past lie below 107.77 – one at 107.29 and the other at 107.48 – which could also act as barriers to gains.

Weaker-than-anticipated figures out of the US might lead to declines in USDJPY. Support in this case might come around the current level of the 50-day moving average at 107.05, which also encapsulates the 107 handle.

Rising geopolitical and/or trade uncertainty can also affect the pair, particularly pushing it lower. The opposite holds true as well.