FOREX: The dollar was struggling to gain ground during the early European afternoon against the Japanese yen (-0.11%) ahead of the US retail sales released later in the day. The yen was making a comeback during today’s European session as geopolitical risks were hanging in the background following Saturday’s military attack in Syria conducted by the US, France, and Britain, though the negative market reaction has been muted so far. It is worth mentioning that Japan and China agreed to improve ties after the first high-level meeting in eight years, a few days before the US and Japanese leaders meet to discuss on trade and North Korea. The dollar index, which gauges the greenback’s strength versus six major currencies, slipped below the 20- and 40-day SMAs, losing 0.28% on the day. Euro/dollar was trading higher by 0.30% after a flat Friday as German bonds yields reached three-week highs today and Spain got an upgrade in ratings from Moody’s. Pound/dollar remained resilient, rising by 0.48% despite Britain’s military intervention in Syria. Six days have now passed without a pullback in Cable, with prices reaching a fresh 2 ½-month high today. The Canadian dollar will be in focus this week as the Bank of Canada will meet to decide on interest rates on Wednesday. No changes in policy are expected but there could be a hint of optimism. After the strong sell-off in the preceding week, dollar/loonie was trading slightly higher by 0.04% at 1.2600. The antipodean currencies were mixed, with aussie/dollar up at 0.7772 (+0.08%) and kiwi/dollar down at 0.7343 (-0.19%).

STOCKS: European stocks were mixed at 0932 GMT. The pan-European STOXX 600 and the blue-chip Euro STOXX 50 were trading near their opening levels, down by 0.06% and up by 0.08% respectively. The German DAX 30 rose by 0.19%, the French CAC 40 was slightly up by 0.01%, while the Italian FTSE MIB was unchanged. The UK’s FTSE 100 slipped by 0.33%. Asian markets ended mixed as selling in bank shares slugged Chinese indexes, while futures tracking the US indices were pointing to a positive open.

COMMODITIES: In energy markets, oil fell aggressively on Monday as the market wagered the latest US-led strike on Syria would not escalate into a wider conflict. WTI crude oil plunged by 1.25% after it hit a fresh 3-year high of $67.73 on Friday. Brent crude oil plummeted by 1.25% as well following five winning daily sessions. In precious metals, gold prices were little changed, falling by 0.06% to $1,344.10 an ounce. 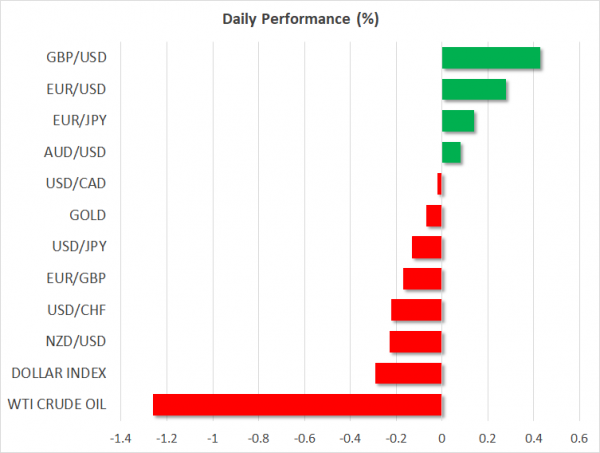 Day ahead: US data to come to light but geopolitical developments could dominate headlines

Monday’s economic calendar will feature US data later in the day, but any potential headlines linked to Saturday’s military strikes in Syria will probably steal the attention, bringing further volatility to the greenback.

Early on Saturday, the US, France, and Britain launched 105 missiles on chemical weapon facilities in Syria aimed to punish the Syrian government for the chemical attack in the town of Douma on April 7. The action escalated war fears in the region, but the market reaction was limited on Monday as Russia and Iran, which are accused of backing Syrian government, have so far avoided responding in the same manner despite both heavily criticizing the attack. Besides that, the story took an economic turn as well, with the US warning to impose new sanctions on Russia. The ball is now in Russia’s hands and investors are eagerly waiting to see how Putin will retaliate after the Russian ambassador to Washington said that “such actions will not be left without consequences”. If the US-Russia conflict exaggerates, the dollar could face additional pressure, probably sliding below the 107 key-level. However, if Russia decides not to fight back, the dollar could pare some losses.

Regarding today’s data releases, retail sales (1230 GMT), the New York Fed manufacturing index (1230 GMT), business inventories (1400 GMT), and the NAHB housing market index (1400 GMT) will be closely watched in the US. Particularly analysts believe that in March, retail sales have increased by 0.4% on a monthly basis after recording declines in the past two months. Excluding vehicles, though, the measure is expected to rise at February’s pace of 0.2% m/m. February’s business inventories and April’s NAHB housing index are also anticipated to remain unchanged, while April’s NY Fed manufacturing index could show some weakness.

At the same time, Fed speakers will also be in the spotlight. At 1400 GMT, Dallas Fed President, Robert Kaplan, and Minneapolis Fed President, Neel Kashkari – neither of who hold voting rights within the FOMC in 2018 – will be delivering speeches, while a few hours later at 1715 GMT, Atlanta Fed Governor, Raphael Bostic, a voting member within the FOMC, will be making comments.

In equity markets, earnings season continues, with Bank of America and Netflix being among the companies to report quarterly results.

Early on Tuesday at 0300 GMT, Chinese growth, retail sales, and industrial readings will take the center stage amid trade uncertainties following the US-China recent import tariff game which could add fuel to what markets fear of a global trade war if the countries decide to implement their punitive measures. Note that the US has threatened to impose additional tariffs on Chinese imports besides the ones on aluminum and steel which are already in effect, finding resistance from China who warned to target 128 US products as well. According to forecasts, Chinese GDP growth has slowed down slightly to 6.7% y/y in the first quarter of the year, but it is too early to blame the US trade policy for this softness. Separately, Chinese industrial production for the month of March could have eased as well on yearly terms, whereas retail sales are said to have improved in the same period. Should the numbers disappoint, the Chinese yuan could move to the downside, while the antipodean currencies such as the aussie and the kiwi could increase negative momentum as Australia and China hold tight trade relations with China.