FOREX: Sterling extended yesterday’s rally towards a 22-month high of 1.4375 early today, its highest level since Britain voted to leave the European Union. However, after a disappointing wage growth print today, cable lost ground falling to 1.4315 (-0.14%) despite the unemployment rate inching down to a new 42-year low of 4.2% in February. Dollar/yen was slowly recovering losses made after Trump accused Russia and China of devaluating their currencies, something seen as indicating Trump’s preference for a weaker dollar. The pair was last seen at 107.80 (-0.03%). Euro/dollar slipped back to 1.2364 (-0.11%) after the German ZEW economic sentiment index posted the largest decline since November 2012, while the Eurozone equivalent touched the lowest growth since July 2016. The antipodean currencies weakened, with aussie/dollar and kiwi/dollar being down by 0.04% and 0.31% respectively. Earlier in the day, Chinese yearly GDP growth and retail sales data came in better than expected but discouraging readings on industrial production kept market gains limited. Moreover, the RBA meeting minutes proved once again that a rate hike is not expected anytime soon. Dollar/loonie was trading near its opening level at 1.2562 (-0.01%).

STOCKS: European stocks traded higher today, tracking modest overnight gains after data showed China’s economy grew slightly more than anticipated in the first quarter while easing tensions between Russia and the US provided further support. The pan-European STOXX 600 and the blue-chip Euro STOXX 50 were up by 0.35% and 0.60% respectively. The German DAX 30 climbed by 0.82%, the French CAC 40 gained 0.47%, the Italian FTSE MIB rose by 0.28% while the UK’s FTSE 100 moved higher by 0.26%. Asian equities closed mixed. Futures tracking the major US stock indices were pointing to a positive open. 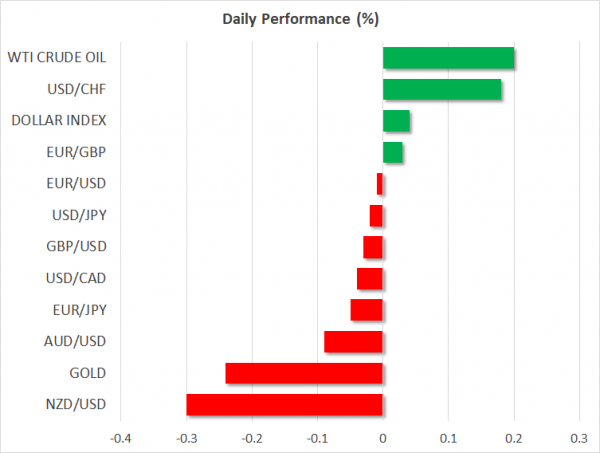 Day ahead: US industrial production to ease; Abe flies to meet Trump

In the US, building permits and housing starts are scheduled for release at 1230 GMT, with both indicators expected to slightly improve in March, though industrial production due at 1315 GMT could attract more attention. Particularly, analysts expect that American factories have slowed down production in March, with the output growing by 0.4% on a monthly basis compared to 0.9% in February. Manufacturing output, a subset of industrial production, will also be eyed.

In Canada, investors will be taking a look at February’s manufacturing sales due at 1230 GMT which are projected to expand by 1.0% m/m following two consecutive months of declines. A few hours later at 2030 GMT, the focus will turn to the API weekly oil report for the week ending April 13; this might also affect the loonie as Canada is a major oil exporter.

Elsewhere, an update on global dairy prices published at a tentative time will be in focus for the New Zealand dollar (Reuters projects the report to come out around 1200 GMT). Note that the global dairy trade price index was on the backfoot the past six weeks. Should the measure stretch its negative pattern, the kiwi could face additional pressure.

In Japan, trade data will be under the spotlight at 2350 GMT, anticipated to indicate a wider trade surplus in March. Forecasts are for exports to pick up by 4.7% y/y, surpassing February’s growth mark of 1.8% which was the lowest in a year, while imports are projected to post a single-digit expansion of 5.4% for the first time since February 2017. Meanwhile, the Japanese Prime Minister, Shinzo Abe, will be holding a two-day meeting with the US President, Donald Trump, in Florida starting today. Discussions are likely to revolve around trade and North Korea ahead of a crucial summit between Trump and the North Korean leader, Kim Yong Un, in late May or early June. Abe, who has met with Trump on six other occasions already, more than any other leader, might attempt to ensure that the US and Japan are on the same page regarding North Korea’s nuclear program. Moreover, on the trade front, he could negotiate an alternative trade deal with the US as a bilateral partnership seems to be not in his interests. Note that Japan failed to receive an import tariff exemption from the US on aluminum and steel.

In equity markets, Goldman Sachs and Johnson & Johnson will be among companies to report quarterly earnings before the US market open.

Developments in Syria will continue to attract interest, as investors are waiting to see how the US and its allies will act from now on following Saturday’s strike. 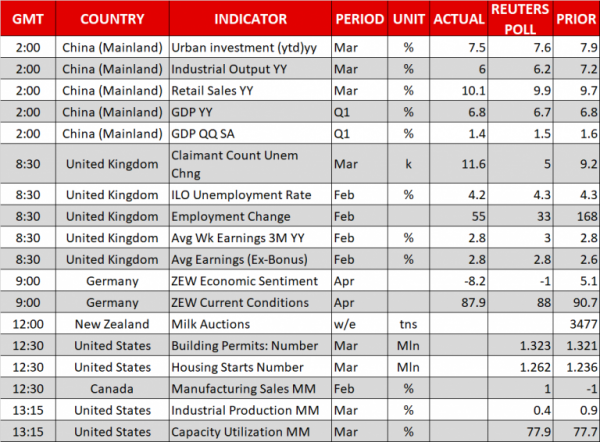