Action Forex
HomeContributorsFundamental AnalysisDollar Bulls 'Back On The Case', US Consumer Confidence Due

Dollar Bulls ‘Back On The Case’, US Consumer Confidence Due

FOREX: The US dollar traded 0.1% lower against a basket of six major currencies on Tuesday, giving back some of the notable gains it posted yesterday on the back of surging US bond yields. Despite today’s pullback, the dollar index is still trading near a three-month high. Elsewhere, kiwi/dollar fell by 0.5%, with no clear fundamental catalyst behind the decline.

STOCKS: US markets closed lower yesterday, for the most part. While the Nasdaq Composite and the Dow Jones declined by 0.25% and 0.06% respectively, the S&P 500 managed to eek out a 0.01% gain, and close in positive territory. Equities appear to be struggling amid a sustained increase in US bond yields, a factor that typically weighs on demand for stocks as bonds start to offer a better return. Asian indices, on the other hand, were mostly in the green today. In Japan, the Nikkei 225 and the Topix climbed by 0.86% and 1.08% correspondingly, boosted by a fall in the yen. In Hong Kong, the Hang Seng advanced 0.85%. In Europe, futures tracking the major indices were mixed, though all were close to neutral territory.

COMMODITIES: Oil prices are higher today, building on their gains from yesterday. WTI and Brent crude are up by 0.9% and 0.8% respectively, both trading near their respective three-and-a-half year highs. There were no major oil-related headlines, so prices appear to be supported by speculation that fresh sanctions on Iran are looming, and that Saudi Arabia is committed to boosting prices. In precious metals, dollar-denominated gold is 0.2% higher today, recovering some of the losses it posted yesterday as the US dollar surged. Elsewhere, aluminum prices plunged 7% on Monday, after the US extended the deadline for sanctions on Russia’s aluminum producer, Rusal. 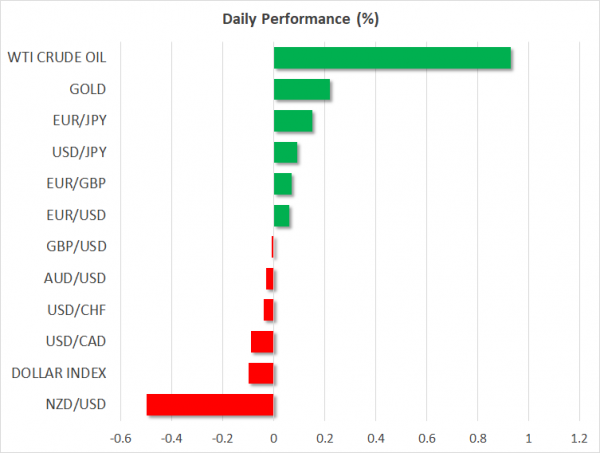 The US currency enjoyed another day of advances on Monday, with the dollar index reaching its highest level since January 12, propelled higher by a sustained rise in longer-term US Treasury yields. The yield on 10-year Treasuries climbed to 2.998% before retreating somewhat, coming just shy of touching the notorious 3.0% level, and increasing the attractiveness of the greenback overall.

Technically, the dollar index is at an important crossroads. It is trading just below the 91.00 zone, which is the upper bound of the sideways range that has contained the price action since the middle of January, between that hurdle and 88.20. A decisive break above 91.00 in the coming days would mark a higher high on the daily chart, thereby turning the technical picture to cautiously positive, from neutral currently.

Fundamentally, it is interesting to note that the rise in US yields has been accompanied by a hawkish repricing of Fed rate expectations. At the time of writing, markets have fully priced in two more quarter-point rate hikes this year, and also see a 25% probability for a third one according to the Fed fund futures. For comparison, just a few days ago, only one more hike was fully priced in and markets saw an 80% chance for a second one. Thus, investors appear to be betting that the commodity-related surge in inflation that is likely to occur in the coming months will lead the Fed to act more aggressively, lending support to the greenback.

In the antipodean sphere, aussie/dollar is practically unchanged, following a mixed bag of inflation data out of Australia. While the headline CPI rate for Q1 disappointed slightly, the trimmed mean rate surprised to the upside. Overall though, this set of data suggests there is no pressure on the RBA to act any time soon, reinforcing the narrative the Bank is set to remain on hold through 2018.

As for kiwi/dollar, it is 0.5% lower today, without any clear fundamental trigger behind the plunge. 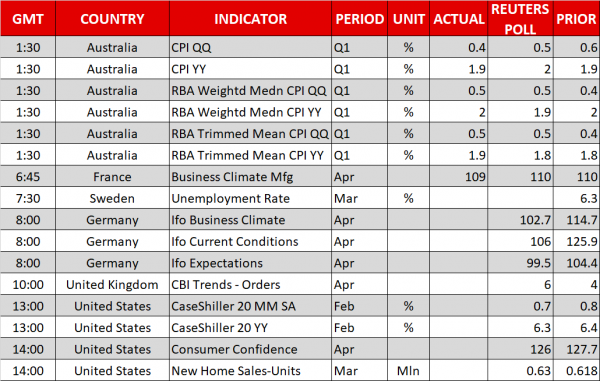 Day ahead: Ifo surveys out of Germany; US consumer confidence and new home sales also due

Tuesday’s calendar features the release of business confidence surveys out of Germany, as well as consumer confidence and new home sales data out of the US.

At 0730 GMT, krona pairs will be in focus as Sweden sees the release of March’s unemployment rate.

The Ifo Institute for Economic Research will publish its business climate index for Germany at 0800 GMT. The measure, which gauges business confidence, is anticipated to continue declining in April, falling to its lowest since late 2012 and pointing to further loss of economic momentum in the eurozone’s largest economy. The institute’s current conditions and expectations indices will also be made public at the same time and are also expected to record declines.

In the UK, the Confederation of British Industry will release its order book balance for the month of April. Analysts are projecting an increase, after factory orders fell to a five-month low in March (though still remained relatively robust by historic standards).

The most important releases out of the US will pertain to the Conference Board’s consumer confidence gauge for April and March’s new home sales. Consumer confidence is forecast to ease for the second straight month, though still remain at elevated levels, while new home sales are projected to rise by 1.9% m/m, more than making up for February’s fall of 0.6%. Earlier in the day (1300 GMT), the Case-Shiller indices, gauging house prices, will also be made public out of the world’s largest economy.

In one of the busiest weeks in terms of corporate earnings releases, 3M and Harley-Davidson are among companies releasing results on Tuesday; both report before Wall Street’s opening bell.

In energy markets, the API weekly report on crude inventories is due at 2030 GMT.

Policymakers making appearances include Bank of England Governor marks in store this time arounMark Carney and Philadelphia Fed President Patrick Harker, a non-voting FOMC member in 2018 (both at 1800 GMT). Last week’s comments by the former led to a tumble in hike odds by the BoE during its May meeting and it will be interesting to see whether he has any market-sensitive red. 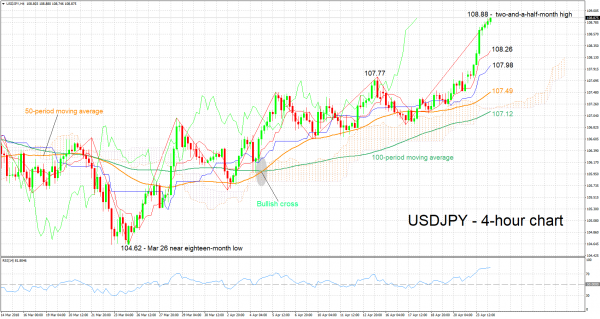 USDJPY just recorded a two-and-a-half-month high of 108.88. The positively aligned Tenkan- and Kijun-sen lines are projecting a bullish short-term picture. The RSI supports this view as it is well above its 50 neutral-perceived level and continues rising. Notice though that the indicator’s positive slope has eased somewhat – something which might signal weakening positive momentum – while it is also in overbought territory above 70.

Upbeat US releases later in the day might add further gains to the pair. The area around the 109 round figure might be acting as a barrier to gains at the moment, with an upside break potentially targeting the 110 handle, that may also hold psychological significance.

Weaker-than-anticipated data might open the window for profit-taking, pushing the pair lower. Support to declines could come around the current levels of the Tenkan- and Kijun-sen lines at 108.26 and 107.98 respectively. The range around the latter also encapsulates the 108 handle.

US-Japanese bond yield differentials also have the capacity to spur movements in the pair.