The US dollar had massive weekly gains against all majors. The release of the gross domestic product for the first quarter of 2018 beat expectations but did little for a dollar that had rallied all week. Dovish central bank rhetoric from the European Central Bank (ECB) and the Bank of Japan (BOJ) have increased the anticipation for the U.S. Federal Reserve’s Federal Open Market Committee (FOMC) on Wednesday, May 2 at 2:00 pm EDT. There is little chance that the Fed will hike rates in May, but the strong data has put three more rate hikes firmly on the table. Employment data will play a big part in that decision and with the release of the U.S. non farm payrolls (NFP) on Friday, May 4 at 8:30 am EDT all eyes will be on average hourly earning for any insight into inflationary pressures.

The EUR/USD lost 1.28 percent during the week. The single currency is trading at 1.2129 after the growth of the US economy beat the forecast. Gross domestic product in the United States came in at 2.3 percent when the market expected 2.0 percent. The hawkish tone of the Fed’s latest comments and strong indicators are boosting the US across the board. In contrast European data has been disappointing and has put the European Central Bank (ECB) in a tough spot, as its QE program is nearing its end in September. 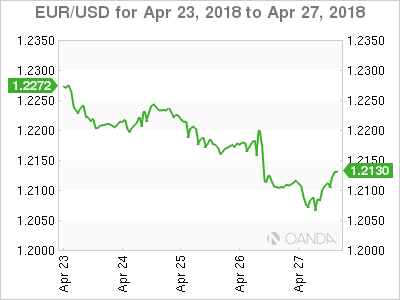 The week of April 24 to 27 had few economic calendar releases. The European Central Bank (ECB) and the Bank of Japan (BOJ) were the highlights, but as expected held their respective quantitive easing programs unchanged. The US dollar is ahead versus major pairs after Fed members have been talking up the probabilities of three more interest rate hikes this year. The U.S. Federal Reserve already hiked once in March and with steady growth of the economy it aims to increase the interest rate divergence with the major central banks.

The European Central Bank (ECB) opted to leave its benchmark rate intact and made no announcements regarding the end of the quantitative easing program. ECB President Mario Draghi was neither hawkish nor dovish, which resulted in little support for the euro. The eyes of the market will now be fixed in the June and July meetings for some insights into the plans of the central bank.

US companies reported earnings this week with the good results driving stock prices higher in particular the tech sector. US yields continue to flirt with the 3.0 percent line, but this time it is under as the 10 year note fell to 2.990 percent. US unemployment claims fell to 209,000 fell to its lowest level in 48 years with next week’s U.S. non farm payrolls (NFP) to show if there is any impact of strong US employment on wage growth.

RBA expected to hold rates unchanged at 1.5 percent. The RBA could be on the sidelines for the rest of 2018. Central bank has a balanced outlook. Global trade uncertainty to be a factor coupled with a Chinese economic slowdown.

US jobs reports to have strong headline numbers, but the devil is in the inflation details. Employment has been a strong pillar of the US recovery, but wages have lagged behind. The more dovish members of the Fed make a point to cite the lack of inflationary pressure when they point to their more hawkish colleagues. Higher wages would validate the Fed’s plans for 3 or 4 rate hikes this year.

The Fed will meet next week with no changes expected to be announced on Wednesday. The Fed has hinted through rhetoric that if growth keeps up 3 more rate lifts would be needed. The market had already priced in 3 this year, so the fourth bump in borrowing costs has given the US dollar a boost in April.

Pound Looking Ahead at PMIs after Disappointing Q1 GDP

The GBP/USD lost 1.59 percent in the past five days. The currency pair is trading at 1.3780 after the disappointing GDP reading for the first quarter is putting serious doubts on a May rate hike by the Bank of England (BoE). 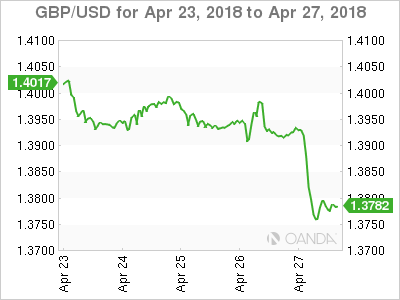 The British economy had a slow start to 2018. Purchasing manager indices (PMIs) for manufacturing, construction and services have disappointed this year. With Bank of England (BoE) Governor Mark Carney surprising investors last week with comments suggesting the central bank could not hike rates in May, economic indicators, specially leading ones such as PMIs gain more relevance in trying to forecast the moves of the central bank. Carney has pointed out that mixed data could push out a rate rise until later this year.