The Canadian dollar was lower on Tuesday after the US currency rose on the back of the uncertainty surrounding the United States participation in the Iran deal. The greenback rose as investors looked to the currency as a safe haven. US President Donald Trump announced that the US would be pulling out of the 2015 nuclear agreement and would reimpose economic sanctions on Iranian exports. The move was not unexpected as the Trump administration had criticized the deal but allies were hoping the US would remain, as it stands there are still 5 nations who are backing the deal. The United Kingdom, France, China , Russia and Germany remained committed to the deal where Iran will receive no sanctions as long as it complies with stopping its uranium enrichment program.

Loonie Falters as End of Iran Deal Could Influence NAFTA

The USD/CAD gained 0.56 percent on Tuesday. The currency pair is trading at 1.2953 after the US pulled out of the Iran nuclear deal. The loonie fell to a seven week low. The Canadian currency is heavily correlated with oil prices, but in this instance the announcement from President Trump triggered a flight to safety favouring the USD. Contradictory reports ahead of the final decision sparked volatility in the market. CNN published a piece that gave hope the US would remain in the Iran deal. A New York Times report had a source say that Trump had already told French President Emmanuel Macron that he would exit the agreement. The French president denied those details but eventually that was exactly what came to pass. European leaders were in talks with Iranian leaders and issued a statement where they condemned the decision by the US president. 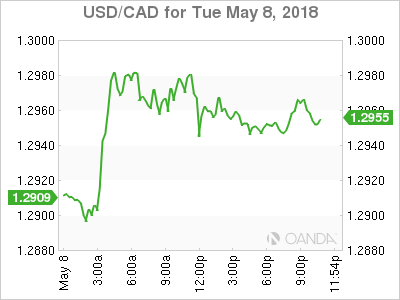 The price of oil rose, but given the geopolitics it was the US dollar that appreciated against the CAD. Taking into consideration another agreement, NAFTA is still under renegotiation and the manner in which Trump ended the Iran nuclear deal there is some pessimism about the trade deal. Canadian, Mexican and US officials have been in meetings this week trying to bring the deal to a successful conclusion after months of slow moving negotiations. Shale provided the edge needed for the US to move to the top of the energy production chain and given that other major producers agreed to limit their output this is not something that will change in the short term.

West Texas Intermediate is trading at $69.71 after the US pulled out of the Iran deal. The landmark nuclear deal that lifted economic sanctions against Iran in exchange for reducing the enrichment of uranium in 2015 will continue with the other 5 signatories but prices are rising as the Organization of the Petroleum Exporting Countries (OPEC) second largest producer could face heavy sanctions from the US. The fact that the European leaders assured Iran of their commitment to the deal should limit the impact on oil supply but as more details emerge on US sanctions energy prices will react accordingly. 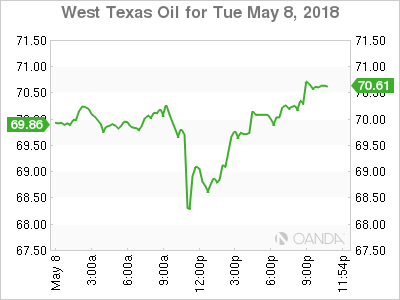 The announcement today from President Trump kicks off a 180 day grace period so that American companies can wind down any oil related activities. The sanctions from 2015 will be reapplied with the main target being Iranian oil exports and the US has already warned purchasers that reducing their consumption volume is advised to avoid secondary sanctions.

Oil prices had attained stability after the Organization of the Petroleum Exporting Countries (OPEC) and other major producers agreed to limit production last year. Geopolitical events, specially those that directly impacted oil supplies had slowly pushed prices higher. The uncertainty about the Iran deal put crude prices at levels not seen since November 2014.

Weekly US crude inventories will be released tomorrow at 10:30 am EDT with a drawdown expected after a huge buildup last week. Energy prices have been stable as the OPEC and allies have cut down supply, but the US has not ramped up supply as first thought. While the speed of the move has not been as forecasted the direction of the trend continues to be up. Drilling has quietly been increased as current prices make shale operations profitable.