Wednesday May 9: Five things the markets are talking about

The threat of an increase in geopolitical tension in the Middle East is weighing on global sentiment just as concern spread over the implications of higher U.S Treasury yields and a stronger dollar.

Overnight, the ‘big’ dollar has rallied for a fourth consecutive session, pressurizing emerging-markets pairs and mudding the picture for commodities as investors digest President Trump’s announcement yesterday to walk away from the Iran nuclear deal.

Elsewhere, U.S bond yields again have penetrated the psychological +3% handle as the market prepares to take down another +$73B of new U.S debt product this week.

Global equities have produced mixed results, while most metals are trading under pressure.

In Japan, stocks fell overnight as global tensions flared after President Trump pulled the U.S out of the nuclear deal with Iran. The Nikkei ended down -0.4%, while the broader Topix was down -0.3%.

Down-under, Aussie shares ended slightly higher on Wednesday, as gains across a number of sectors following an optimistic budget were offset by financials. The S&P/ASX 200 index rose +0.26%. In S. Korea, the Kospi fell -0.24%.

In Hong Kong, stocks rallied, led by the energy sector after Trump pulled out of the Iran nuclear deal, sparking fears about global oil supplies. The Hang Seng index rose +0.4%, while the China Enterprises Index gained +0.3%.

In China, equities ended a tad lower overnight as losses in the financial and property shares outweighed gains in energy stocks. The blue-chip CSI300 index fell -0.2%, while the Shanghai Composite Index dipped -0.1%.

In Europe, regional indices trade higher across the board, trending upwards on the back of rising U.S futures following earnings and geopolitical events. 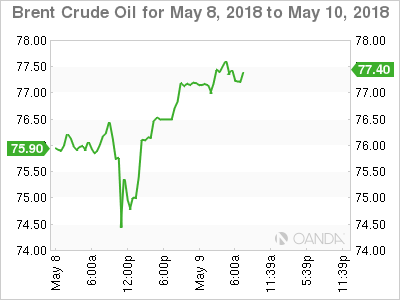 Oil prices have rallied more than +3% overnight, hitting a four-year high, after the U.S walked away from the Iran nuclear deal and announced the “highest level” of sanctions against the OPEC member.

Note: In China, the biggest single buyer of Iranian oil, Shanghai crude futures hit their strongest since they were launched in late March.

Iran is the third-biggest exporter of crude within OPEC, behind Saudi Arabia and Iraq. Walking away from the nuclear deal means that the U.S will re-impose sanctions against Iran after 180 days.

The oil supply/demand is somewhat currently ‘balanced’ and it could turn to a complete supply shortage. Nevertheless, Saudi Arabia this morning said it would work with other producers to lessen the impact of any shortage in crude supplies.

Note: Saudi Arabia has been leading efforts since last year to withhold production to prop up prices.

Ahead of the U.S open, gold prices are trading under pressure, atop of their weekly lows, as the ‘big’ dollar strengthened after U.S’s decision out of the Iran nuclear deal boosted energy prices and pushed Treasury yields higher. Trump said he would reimpose U.S economic sanctions on Iran that had been lifted under the 2015 agreement. 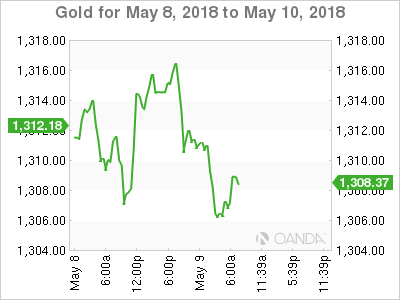 3. U.S yields back up to old territory

Stateside, today brings with it a +$25B auction of 10-year U.S notes and the market is waiting to see if the new bonds will carry a +3 % coupon for the first time in nearly seven-years.

Currently, the yield on U.S 10-year Treasuries has climbed +3 bps to +3.00% in the overnight session, the highest in two-weeks on the biggest increase in almost three weeks.

In Sweden, Norway and Hungry, CPI data this morning came roughly in-line with expectations and any concerns of “prolong low inflation” seem to be abating. 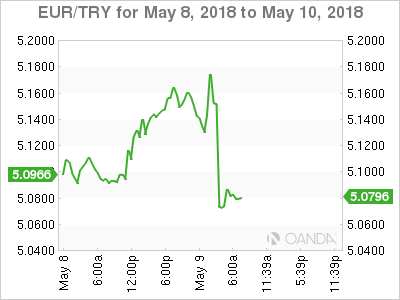 TRY ($4.2858) has reversed its earlier losses outright after their central bank (CBRT) this morning took additional liquidity measures in a move to prop up the currency. The CBRT has increased the daily amount of currency swap auctions from +$1.25B to +$1.5B. The sale position of forward foreign exchange auctions may increase from $5.3 billion to $7.1 billion by the end of June, the central bank said. President Erdogan would hold a meeting on exchange rates.

Note: The krona lost ground between late January and early May after the Riksbank twice postponed a first rate increase in years due to the fact that the underlying inflation trend had turned lower.

Elsewhere, the Bank of England (BoE) could help boost the pound (£1.3531) if it raises interest rates tomorrow. However, the central bank has communicated before that a rate rise is not a given, which has led the fixed income market to price out a May rate increase. The consensus is for the BoE to stand pat, but most believe that a summer hike is in the works.

Similar to the Argentinian peso, Indonesia’s rupiah has fallen to a fresh 29-month low on worries about capital outflows from emerging markets.

Note: Argentina’s reliance on U.S dollar funding, coupled with the depreciation of its own currency is sending the country in to the all-too-familiar direction: financial turmoil. 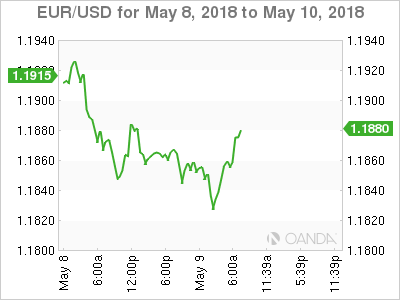 INSEE said industrial production fell by -0.4% in March m/m, after rising +1.1% in February. The figure for the previous month had been revised down from a preliminary reading of +1.2%. 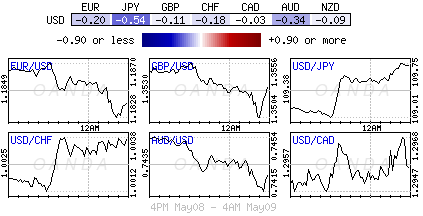