FOREX: The US dollar index is lower by 0.15% on Monday, extending the losses it posted on Friday. The disappointment in the US core CPI last week appears to have taken the wind out of the greenback’s sails, with yields on 10-year US Treasuries unable to sustain a foothold above the widely-touted 3.0% level.

STOCKS: US markets closed mostly higher on Friday. The Dow Jones and the S&P 500 rose by 0.37% and 0.17% respectively but the tech-heavy Nasdaq Composite closed marginally lower (-0.03%), dragged down mainly by cybersecurity software maker Symantec (-33.1%). The company announced an internal investigation will delay its annual report and may lead to a restatement of its earnings. As for today, futures tracking the Dow, S&P, and Nasdaq 100 are all pointing to a higher open, probably due to encouraging news over the weekend regarding the US-China trade talks (see below). The positive sentiment was evident in Asia today, with Japan’s Nikkei 225 and Topix climbing by 0.47% and 0.61% correspondingly. In Hong Kong, the Hang Seng advanced 1.12%. In Europe, futures following the major indices were mixed, though all were close to neutral territory.

COMMODITIES: Oil prices are lower on Monday, after having retreated on Friday as well. WTI and Brent are down by 0.3% and 0.4% respectively. The retreat may be partly owed to comments from the UAE oil minister, who said OPEC has enough spare capacity to offset any crude lost due to sanctions on Iran. Another marked increase in the Baker Hughes rig count on Friday may have played a role too. In precious metals, gold is 0.2% higher today, remaining close to the $1,320/ounce mark. The yellow metal has been unable to assume a clear direction lately, trading between its 100-day and 200-day moving averages. A potential break of either of these technical barriers may determine the next directional wave in the metal. 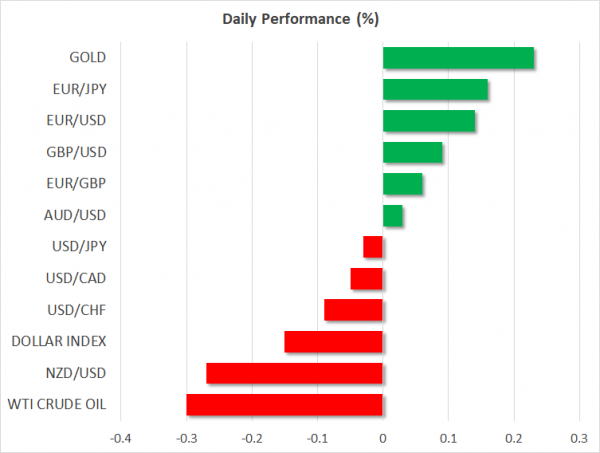 The US currency was on the back foot on Monday, extending the losses it posted on Friday. The optimistic sentiment surrounding the dollar looks to have cooled for now, as the disappointing US inflation data last week probably scaled back some bets for aggressive rate hikes by the Fed this year.

Euro/dollar (+0.15%) crossed back above 1.1950, with the common currency remaining largely unfazed by political developments in Italy, where the next government looks increasingly more likely to be formed by anti-establishment parties.

Sterling/dollar was up by nearly 0.1%, having recovered nearly all of its BoE-induced losses from last week. That said, the recovery appears to be owed more to dollar weakness than sterling strength, considering that euro/sterling has remained elevated following the BoE meeting, with the pound unable to gain ground versus the euro.

Dollar/loonie rebounded on Friday, after it touched a three-week low of 1.2730, following the release of soft employment data out of Canada. While the unemployment rate held steady as expected, the net change in employment turned negative, and the labor force participation rate ticked down. Despite the miss, markets did not materially pare back expectations for near-term BoC rate increases. Investors currently assign a 40% probability for a rate hike at the May meeting, and a 74% chance for that to occur in July.

On the trade front, President Trump extended an ‘olive branch’ to China by ordering the US Commerce Department to help Chinese telecommunications giant ZTE to ‘get back into business, fast’. The firm had suspended its operations last month after the Commerce Department banned US companies from selling it components. Also, China’s Vice Premier and top economic adviser Liu He will visit the US for further negotiations. It thus appears that both sides are committed to finding solutions through talks, which diminishes the likelihood of the situation escalating any further, in the near-term at least. Any signs that tensions are subsiding may support risk appetite in the coming days, potentially helping stocks advance and weighing on safe-haven assets like the yen.

The calendar is practically empty of major releases out of the world’s largest economies for the rest of the day. In the absence of economic data, attention is likely to be diverted elsewhere, such as on the potential outcome in negotiations to form a government between Italy’s major anti-establishment parties.

Any updates on the political situation in Italy will be closely watched as they definitely have the capacity to act as euro drivers. In this respect, anti-establishment parties 5-Star Movement and far-right League spent the weekend attempting to find common ground to govern the country. The two parties said they made progress towards that goal.

Other topics that might gain attention in an empty calendar are geopolitical developments in the aftermath of the Trump administration’s decision to leave the Iran nuclear deal, as well as any updates on global trade. Relating to the latter, China is planning to send Vice Premier Liu He to Washington for more talks.

In equities, the final leg of the earnings season is taking place. One of the notable names releasing results this week is retail giant Walmart (Thursday). 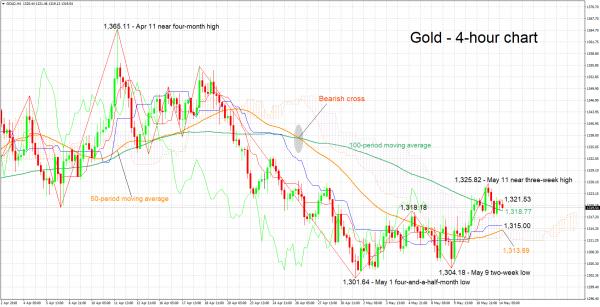 Gold is trading not far below a near three-week high of 1,325.82 hit on Friday. The Tenkan- and Kijun-sen lines are positively aligned, pointing to a bullish short-term picture. Notice though that the latter has flatlined, with the implication being that positive momentum is easing.

Increasing political, geopolitical or trade uncertainty can boost the safe-haven perceived asset. Immediate resistance could be taking place around the current level of the Tenkan-sen at 1,321.53, with last week’s high of 1,325.82 being eyed next in the event of stronger bullish movement.

On the downside and in case of receding uncertainty that diverts funds out of the yellow metal and into riskier instruments, support could come around the current level of the 100-period moving average at 1,318.77, and further below from the region around the Kijun-sen at 1,315.00.

The greenback’s direction can also affect the precious metal; a stronger US currency weighs on the dollar-denominated commodity and vice versa.