FOREX: The US dollar pared some of Tuesday’s gains that were posted after a rally in US treasury yields; 10-year Treasury yields hit as high as 3.095, the highest since 2011. Dollar/yen retreated by 0.18% after it marked a new 3-month high of 110.44 on yesterday’s US session. The US dollar index was moving higher on Wednesday by 0.25%, peaking at a fresh five-month high of 93.45. Eurozone’s inflation rate remained unchanged at 1.2% in April as expected but euro/dollar stretched lower to 1.1786 (-0.29%) on the back of a stronger dollar. Pound/dollar fell to 1.3474 (-0.21%), its lowest reading of 2018, as Brexit uncertainties continued to weigh in the background, with May’s conservatives remaining divided on the type of relationship the UK and the EU should have in the future. The UK government stated that it would publish a detailed withdrawal plan next month. The antipodean currencies were moving higher, both set to complete a bullish day. Aussie/dollar rose by 0.12% on the day, while kiwi/dollar climbed by 0.41%. Meanwhile, dollar/loonie traded slightly lower by 0.10% at 1.2862.The Turkish lira is one of the worst-performing currencies today and as well as of this year. The Turkish President Tagip Erdogan alarmed investors when he said that he plans to take greater control of the economy after the country’s elections. Dollar/lira surged by 1.14%, creating a new record high at 4.4990.

STOCKS: European stocks were moving mixed for the second day in a row at 1050 GMT. The pan-European STOXX 600 and the blue-chip Euro STOXX 50 were up by 0.02% and 0.13% respectively. In Germany, the DAX rose by 0.25%, while the French CAC 40 fell by 0.05%. In Italy, the FTSE MIB 100 tumbled by 1.78% amid political worries, while the British FTSE 100 traded marginally higher by 0.09%. The Spanish IBEX 35 dived by 0.95%. Turning to the US, futures tracking the Dow Jones, S&P 500, and Nasdaq 100 were all in negative territory, pointing to a lower open today after facing a sharp buying interest since early May. On Tuesday, US Stocks fell for the first time in eight straight sessions.

COMMODITIES: Oil prices dipped on Wednesday, after reaching a new high during yesterday’s session, as an increase in US crude inventories signaled that demand is easing despite the ongoing output cuts by OPEC. West Texas Intermediate (WTI) crude oil dropped by 0.18% to $71.18, while Brent moved lower by 0.68% to $77.90. In precious metals, gold recovered some lost ground today (+0.08%) after prices hit the lowest level this year of $1,288.31 on the back of surging US bond yields and a stronger dollar. 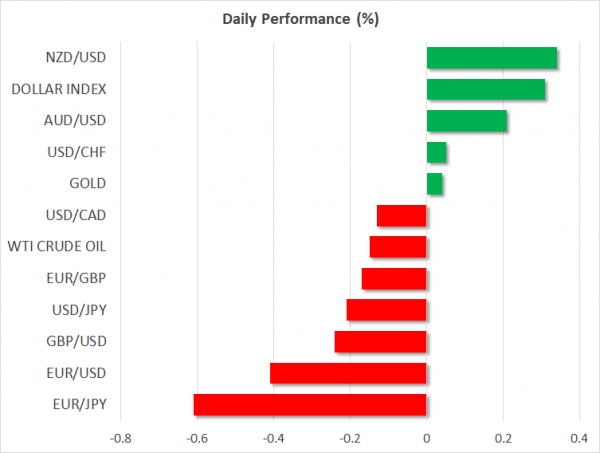 A potential escalation in tensions between the US and North Korea could keep investors in risk-off mode during the day following North Korea’s threat to scrap a historic summit between the US President Donald Trump and the North Korean leader Kim Jong-Un on June 12. The warning arose after a planned joint military exercise between Seoul and Washington, with the North Korea’s First Vice Minister of the Ministry of Foreign Affairs, Kim Kye-gwan, saying in KCNA news agency that if the US pushes “us into the corner and force only unilateral nuclear abandonment, we will no longer be interested in that kind of talks and (we) will have to reconsider whether we will accept the upcoming NK-US summit”. A tough response from the US side could enhance demand for safe-haven assets later in the day and at the same time weigh on the dollar.

A number of economic releases out of the US are also expected to affect the dollar today. At 1230 GMT, the number of building permits and housing starts for the month of April is expected to ease, with the former projected to slip by 290,000 to 1.350mn and the latter to decline by 9,000 to 1.310mn. A few minutes later at 1315 GMT, data on industrial production for the same month are forecast to show a monthly growth of 0.6% compared to an expansion of 0.5% in March.

In Canada, stats on manufacturing sales due at 1230 GMT will have the potential to move the loonie.

Elsewhere, political developments in Italy will attract traders’ attention as the two anti-establishment parties, Five-Star Movement and the right-wing League, will try to reach a coalition deal today. The parties are also said to propose a debt relief of 250 billion euros from the ECB.

In oil markets, the EIA weekly report on US oil inventories delivered at 1430 GMT is anticipated to keep traders busy. According to analysts, US crude oil inventories are said to have declined by around 0.8mn barrels in the week ending May 11, less than a decline of 2.2mn barrels in the preceding week. Yesterday, though, the API weekly report on US crude oil stocks didn’t meet projections for a decline, posting the highest buildup since early April.

In other data under consideration, New Zealand’s Q1 PPI figures and Japanese core machinery readings for the month of March due at 2245 and 2350 GMT respectively are anticipated to slow down. In Australia, the Australian Bureau of Statistics is scheduled to publish its employment report early on Thursday at 0130 GMT.

Meanwhile, in equity markets, CISCO will be delivering its quarterly earnings report before the US market open.

As of today’s public appearances, ECB policymakers, including President Mario Draghi (1200 GMT), and ECB Board members, Benoit Coeure (1230 GMT) and Peter Praet (1430 GMT) will be speaking at a conference in honor of departing ECB Vice President Vitor Constancio. In the US, Atlanta Fed President Raphael Bostic will be talking about the US economy at 1230 GMT, while in Canada, BoC Deputy Governor Lawrence Schembri will be making remarks at 1415 GMT. 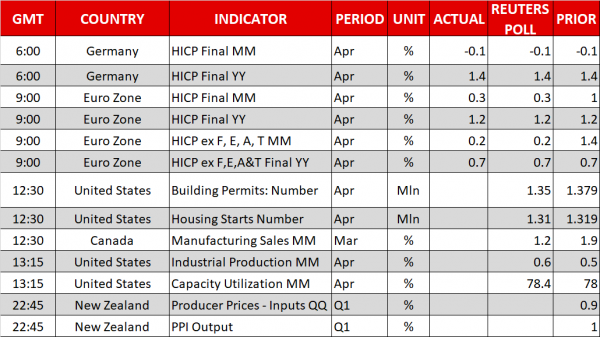