Thursday May 17: Five things the markets are talking about

Since yesterday, Italian bond yields have ballooned on reports of a draft government program, penned by the proposed populist coalition, the introduction of procedures within the eurozone to allow countries to quit the euro. The draft copy indicated that Italy would ask the ECB to write off €250B of government debt.

For Euro supporters, the 5-Star Movement and League have said that their most recent discussions did not put Italy’s membership in the common currency into question.

Elsewhere, the U.S 10-year note yields have extended their advances, rallying through the key resistance at +3.1% as investors continue to adjust to an upbeat outlook for the world’s largest economy.

That aside, most of the markets efforts is now focused on trying to second-guess issues stretching from peace on the Korean peninsula to Italian populists forming a government and Sino-U.S trade talks in Washington today.

On tap: U.S jobless claims are due at 08:30 am EDT, while Chinese Vice-Premier Liu is expected in Washington for more trade talks.

In Japan, the Nikkei share average advanced overnight, following Wall Street, with financial stocks rallying on an increase in sovereign bond yields while tech shares attracted buyers after the yen (¥110.66) weakened. The Nikkei ended +0.5% higher, while the broader Topix gained +0.4%.

Down-under, Australian shares ended lower on Thursday as the country’s second largest bank went ex-dividend, though gains in materials and energy sectors helped limit the overall losses. The S&P/ASX 200 index closed -0.2% lower, the weakest level in over a week. In S. Korea, doubts on a N. Korea/U.S summit occurring have pressured stocks. The Kospi closed down -0.5%.

In Europe, regional bourses trade mostly higher with a rebound in Italian stocks as well as talk the U.K plans to stay in the customs union after Brexit is helping to provide positive momentum. 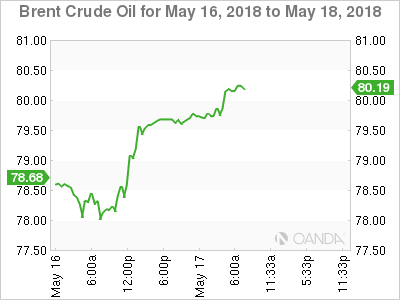 Oil prices have hit their highest level in four-years in the Euro session, with Brent crude creeping closer to +$80 per barrel as supplies tighten and tensions with Iran simmer.

The prospects of a sharp drop in Iranian oil exports in the coming months due to renewed U.S sanction continues to support oil prices on any pullbacks.

Global inventories of crude oil and refined products have dropped sharply in recent months due to robust demand and production cuts by OPEC. This scenario is expected to only get worse as U.S peak summer driving season nears – it should offset increases in U.S shale output.

Ahead of the U.S open, gold prices have erased their early gains overnight and are edging closer to its five-month low, hit in the previous session, as the dollar pared losses against G10 currency pairs and traded within sight of its 2018 peak. Spot gold has fallen -0.1% to +$1,288.65 per ounce, while U.S gold futures for June delivery are nearly -0.3% lower at +$1,288 per ounce. 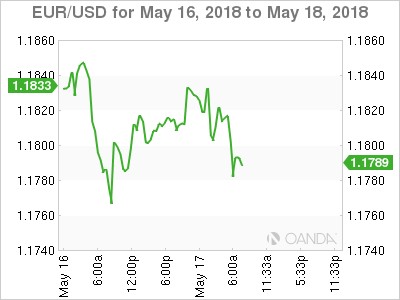 Future price action in Italian government bonds (BTP’s) will depend on the details of the program to be published by the League and the Five Star Movement and party rhetoric.

The 10-year Italian BTP yield has backed an aggressive +15 bps since yesterday and the spread over equivalent German Bunds has surged on a leaked draft agreement of the two parties in which they advocated for the write-off of +€250B in Italian debt and for the creation of a procedure to allow a country to exit the Euro. Ahead of the U.S open, the 10-year BTP yield is down -1.5 bps at +2.096%, 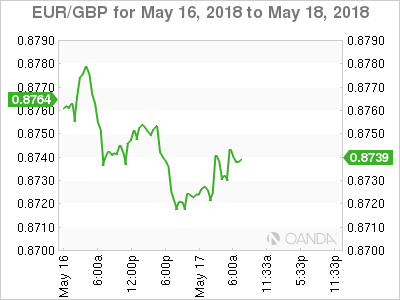 4. Dollar consolidates ahead of event risk

The USD is experiencing some mild consolidation of this week’s gains, but the ongoing marginal steepening of the U.S yield curve is working in favour of a stronger dollar.

EUR/USD (€1.1804) continues to hover atop of some key support levels as investors focus on Italy and on the formation of the next Italian government.

The GBP (£1.3492) rallied during the Asian session after reports circulated that U.K was planning to tell E.U leaders that it was prepared to stay in a customs union beyond 2021 – akin to a ‘soft’ Brexit. However, the report has since been refuted by a government spokesperson in the Euro session.

USD/JPY (¥110.66) has hit its highest level since late January aided by the rising of U.S bond yields.

Elsewhere, most EM currencies are little changed or only slightly lower against the dollar as U.S 10-year Treasury yields continue to rally. The exception is TRY, which is getting battered again. USD/TRY is last up +0.7% at $4.4448, although it has eased from yesterday’s high of $4.50. The consensus believes that without emergency interest rate increases USD/TRY is likely to move above the $4.50 level persistently. 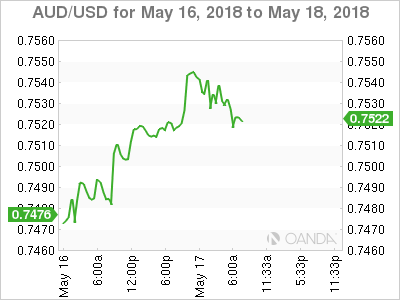 While job growth topped expectations, the uptick in Australia’s unemployment to 5.6% in April is expected to worry the RBA as they continue to fret about low wage growth. 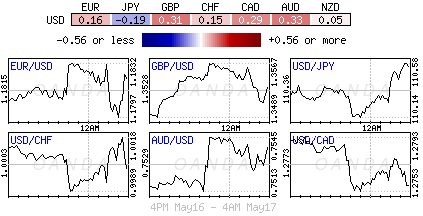