US Treasury Yields Lead Dollar Versus Yen To 4-Month Highs

FOREX: The US dollar is set to extend its gains for the fourth day in a row against the Japanese yen (+0.25%). The pair posted a fresh 4-month high of 110.73 during the early European session as the long-term US Treasury yields continued to rally, touching 3.12%, the highest level reached since 2011. The US dollar index tried to create further gains, moving higher by 0.03%. Euro/dollar fell by 0.14% so far on the day and is approaching the 5-month low of 1.1762, achieved on Wednesday. The pair is affected by political uncertainty in Italy, as parties are trying to create a common platform to lead the next government. Sterling gained 0.06% versus the greenback after the announcement of Prime Minister Theresa May that the UK could stay in customs union after Brexit. Antipodean currencies traded mixed on Thursday, while the Australian jobs data drove the aussie/dollar higher by 0.11% as the employment market grew by 22.6k in April, slightly above expectation of 20.0k. However, the unemployment rate rose by 0.1 percentage points to 5.6% from 5.5% before. Kiwi/dollar traded 0.10% lower, having started the day in positive territory as the country’s Labour-led government forecasted a larger surplus for the year ending June. Dollar/loonie declined by 0.16% to 1.2765.

COMMODITIES: Oil prices reached their highest level since November 2014 on Thursday. WTI crude oil jumped above the $72 handle, adding 1.01% to its performance, while Brent crude flirted with $80 level, rising by 0.87%. The prospects of a drop in oil exports by Iran in the next few months due to new US sanctions after President Donald Trump decision to leave the 2015 Iranian nuclear deal has lifted oil prices in the previous sessions. In precious metals, gold posted further declines (-0.19%), creating a fresh 5-month low of $1,286 on Wednesday. 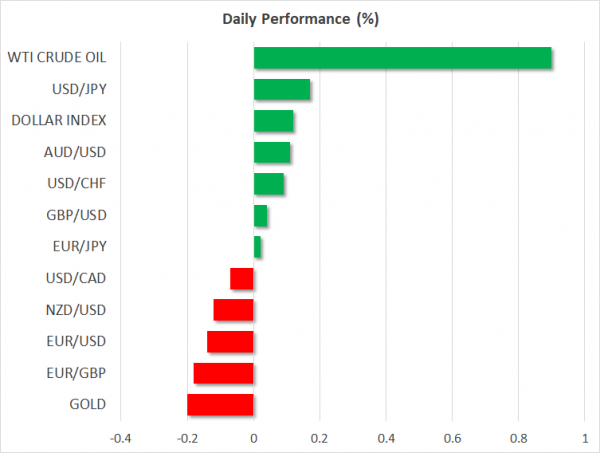 Day ahead: Brexit & Italian political developments in the spotlight

As the day goes on, the focus will remain on the political front as upcoming economic releases scheduled for today have relatively limited potential to move the markets. Moves in US treasury yields, which jumped back above the 3.0% psychological level this week, could be eyed as well.

Particularly, the political situation in Italy is likely to keep investors cautious on the euro on concerns that the two populist parties, the anti-establishment Five-Star Movement and the right-wing League, who are said to be near signing a coalition deal, could propose ideas against Eurozone’s budget program. Yesterday, media reports stated that the Eurosceptic parties are planning to ask for a 250 billion euros debt write-off from the ECB. Although the League party, which still wants Italy to leave the euro, dismissed those leaks later on, talks around a potential debt forgiveness continue to weigh on traders’ confidence.

Meanwhile in the UK, news that the British government is preparing to remain in the EU’s custom union beyond 2021 continued to spur buying pressures in the pound market even after the UK Prime Minister said today that the “UK will be leaving the customs union”. Note that the transitional period agreed between the UK and the EU expires in December 2020 and an extension of this deadline must be agreed between the sides before the submission of a final withdrawal bill, probably in October. Moreover, PM May, who is scheduled to meet the President of the European Council Donald Tusk today could seek to clarify her Brexit plans before June’s EU summit.

Developments around the 2015 Iranian nuclear deal could also be under the spotlight after the French President Emannuel Macron said on Thursday that the European Union should protect business with Iran if the US reimposes sanctions on the oil-exporting nation.

As of today’s data releases, US initial jobless claims, and Philadelphia’s Fed Business index will come into view at 1230 GMT, while at 2330 GMT national CPI readings out of Japan will be under review.

In terms of public appearances, the ECB Vice President Vitor Constancio will be speaking at the third annual ECB macroprudential policy and research conference at 1200 GMT. Minneapolis and Dallas Fed Presidents, Neel Kashkari and Robert Kaplan, will be also delivering comments at 1445 GMT and 1730 GMT respectively; neither holds voting rights within the FOMC in 2018. A meeting between the US President Donald Trump and NATO Secretary General Jens Stoltenberg in Washington to discuss on Israel, Iran, Syria and North Korea is also expected to attract interest.

Retail giant Walmart will be releasing its quarterly results before today’s opening bell on Wall Street.