EURUSD Outlook: Rises Above 1.18 As Impact On Hawkish Fed Fades, ECB In Focus

The Euro probes above 1.18 barrier in early European trading on Thursday, as dollar’s initial strength after Fed’s decision late Wednesday, started to fade. Hawkish tone from the Fed, which signaled two more rate hikes in 2018 initially boosted the dollar and pushed the single currency to one-week low at 1.1724 on Thursday, but Euro’s weakness proved to be short-lived. Subsequent bounce managed to eventually close above falling 30SMA and generated initial bullish signal. Bulls broke next pivot at 1.1810 (Fibo 61.8% of 1.1996/1.1509), with close above it needed to confirm bullish continuation. Momentum remains in steep ascend and supports the advance, along with formation of 5/30SMA bull-cross, with rising weekly cloud continuing to underpin. Focus is turning towards ECB’s policy decision, due later today, as markets expect the central bank to give more details about the timing of winding down its QE program. Bullish scenario requires sustained break above 1.1810 and former high of 07 June at 1.1839 to expose Fibo barrier at 1.1881 (76.4% of 1.1996/1.1509), break of which would unmask psychological 1.20 barrier, reinforced by 200SMA. Solid supports at 1.1780/70 zone (broken 30SMA / top of thick4-hr cloud) are expected to hold and maintain bullish bias. 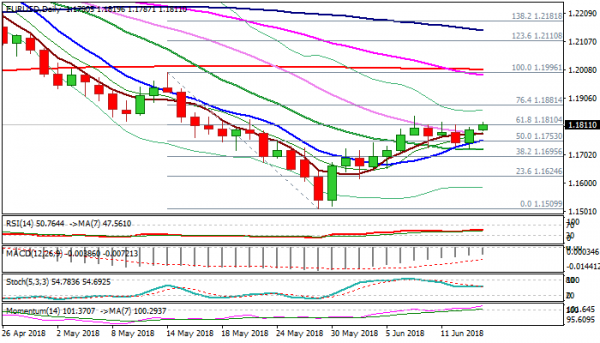