EUR/USD. Recall that in the opinion of 80% of experts who were supported by graphical analysis on D 1, the pair was supposed to continue its descent to the horizon 1.1500. An alternative point of view was presented by only 20% of analysts who expected that it could once again test the level of 1.1790. However, adjustments to all these forecasts have been traditionally made by the summer and vacation season. As a result, the pair, as if tired of lying on the beach, could only lazily rise to the level of 1.1745, and then descend to the level of 1.1574. As for the end of the week, after Donald Trump criticized the Fed policy and the strong dollar, the euro won back the losses, and the pair returned to the upper half of the summer side channel, having stopped at 1.1720;

The negative mood of the market in relation to the pair GBP/USD was supported by the majority of analysts (70%), who expected the continuation of its fall first to the level of 1.3100, and then another 50 points lower. This forecast turned out to be quite accurate: the pair reached the horizon of 1.3100 by the middle of the week, then it groped for the bottom in the support zone for the two-month downtrend channel – 1.2955, fought back and completed the five-day period near its central line at 1.3131;

USD/JPY. Here, too, most experts (70%) expected the dollar to strengthen and the pair to seek to reach the last year’s highs in zone 113.50. In the first half of the week, it was really soaring 80 points. However, the correction in the US stock market caused a decline in its quotes, the pair turned around and fell to the level of 111.40by the end of the week session;

Cryptocurrencies. Two weeks ago, we listed some of the reasons that could lead to the bitcoin growth, and then assumed that the BTC/USD would hold in the range of $ 5,790-6830 for some time. But only if nothing extraordinary happens.

As it always happens with crypto-currencies, it happened – the major financial players announced their desire to enter this market. One of them was the investment giant BlackRock, the asset manager of 6.3 trillion dollars. Another locomotive was the company MasterCard, which registered a patent in the field of operations with bitcoin. All this strongly inspired the market, as a result of which the rate of this digital currency increased by about $1350 (21%), reaching $7.585.

Following the bitcoin, the main altcoins also moved up, but their growth, unlike the leader’s, was short-lived, and by the end of the week the bears managed to restore their positions, if not completely, at least partially. For example, the pair XRP/USD, starting at $0.43, quickly rose to $0.52, but then as quickly fell to $0.45 per coin.

As for the forecast for the coming week, summarizing the opinions of a number of analysts, as well as forecasts made on the basis of a variety of methods of technical and graphical analysis, we can say the following:

EUR/USD. The ECB’s interest rate decision and the press conference of its head Mario Draghi are expected on Thursday July 26. But neither of these are expected to cause any special surprise to the market. More serious concern for the euro is caused by the visit of the European Commission officials to Washington, where they should discuss sanctions and counter-sanctions in the trade war between the EU and the United States with President Trump. The aggravation of the situation may again upset the pair, which is why 60% of analysts are waiting for its return to the level of 1.1575, and in case of its breakdown – to the June-July low at 1.1500. 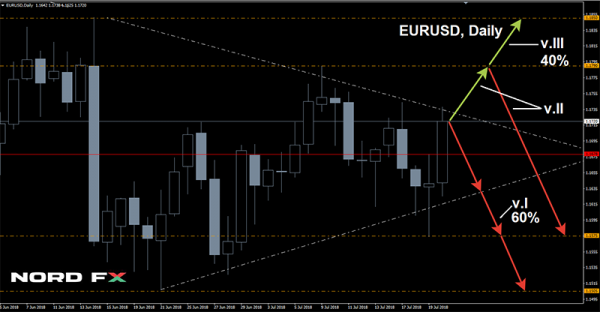 Macroeconomic data from the British Isles, as well as the situation with Brexit, do not inspire optimism, which also affects the analysts’ forecasts. 65% of them, supported by graphical analysis on D1, are waiting for the continuation of the downtrend for the pair GBP/USD. Oscillators on D1 are also Painted in red, indicating it is overbought. Support levels are 1.2955 and 1.2830.

The remaining 35% of experts, together with the graphical analysis on H4, expect a growth of the pair, although small. The pound can also be supported by the UK GDP data, which will be released on Friday 27 July. It is expected that the GDP will grow by 2% compared to the previous quarter. Target levels for the pair are1.3190, 1.3245 and 1.3270;

Cryptocurrencies. If last week the crypto market capitalization was close to the 2018 lows and amounted to about $240 billion, by Wednesday July 18 it was close to $300 billion. But more importantly, the share of buyers at that moment increased to 27%. The last time this happened was on April 8 this year.

However, the increase in volumes occurred too sharply – the first jump lasted only 20 minutes. And even though the bears suffered very significant losses – many short positions closed on stop-losses with significant losses, there is still no confidence in the change in the main trend for an increasing one for the BTC/USD.

By the end of Friday July 20, the pair continues to hold within a strong support/resistance zone of 7,270-7,730, which can be called Pivot Point of spring-summer 2018. It is possible that, despite being overbought, it will still attempt to break through its upper limit. Although, experts believe its decline to support 6,830 to be more likely.

There Is A Variety Of Trends On Currency Majors. Investors Expect Data On The Labor Market