GBPAUD turned increasingly bearish after breaking support around 1.7627 on Friday in the four-hour chart, diving to a two-month low of 1.7406 on Tuesday. While the MACD signals that negative momentum could persist in the short-term, with the index increasing strength to the downside in negative territory and below its red signal line, the RSI and the Stochastics suggest that chances for a rebound are high as both indicators fluctuate in oversold territory; the former below 30 and the latter under 20.

An extension lower could revisit June’s low of 1.7390, where a successful close below that level would resume the downward move started at the end of April and at the same time strengthen bearish action to probably drive the pair towards 1.7350. Even lower, the focus could turn to the 1.7300 psychological level.

Alternatively, if the recent downside is indeed overstretched, a reversal to the upside could meet resistance first at 1.7490 and then at 1.7550 where bears got a rest over the past two days. Only a cross above 1.7627, however, could remove bearish sentiment and turn GBPAUD back to neutrality. 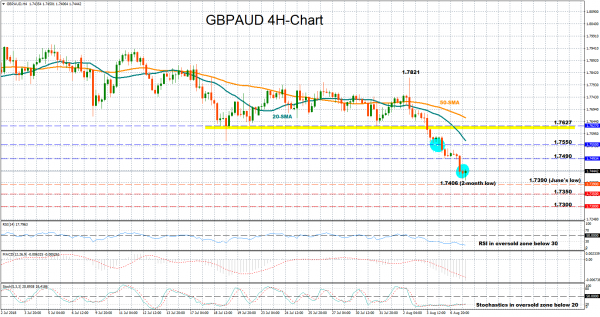