WTI Oil posted the second weekly loss and stayed below psychological $50.00 level which was broken previous week. Crude oil was under pressure as investors doubted willingness of oil producers to extend its output cut deal for the next six months in order to fight global oversupply and support oil prices.

On the other side, concerns over rising production of US shale oil raised question about the use of reduced production that also pressured the price.

Earlier this week, Saudi oil chief acknowledged that the first quarter of cuts failed to stem the glut in supply to below the five-year average but hinted at the possibility of extending the supply-cut agreement beyond June. Renewed hopes of extension of output cut came after Russia affirmed its commitment to the supply-cut agreement, saying it is close to meeting its pledged 300,000 barrels-a-day cut amid concerns over rising U.S. production.

This could be seen as basing attempt after two-week fall, as reversal signal has been generated by daily technical studies, however, oil price will be closely watching developments about extension of production cut that proved to be one of key oil price drivers recently.

Stronger recovery signals could be expected on rise of oil price above pivotal $50.00 and $51.00 barriers. 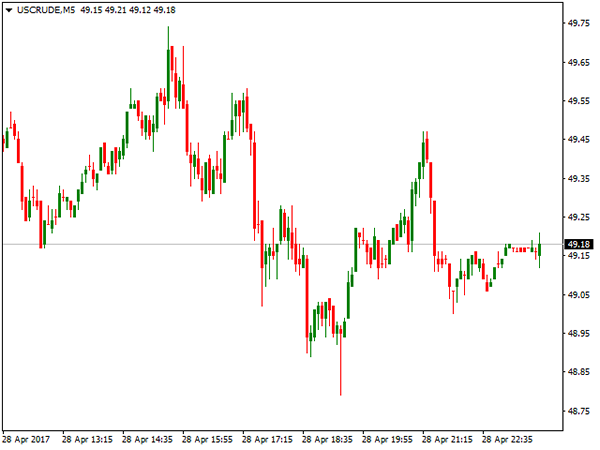 Brent Crude Oil showed similar performance like the WTI contract and found footstep at $51.30 zone, supported by 200SMA, which was cracked on short-lived spike to weekly low at $50.45. Brent oil is also showing technical signals of possible basing and fresh recovery attempts, however, the price remains capped by thick daily Ichimoku cloud (spanned between $52.33 and $53.56) which acts as strong resistance and stronger recovery signals require return above the cloud. 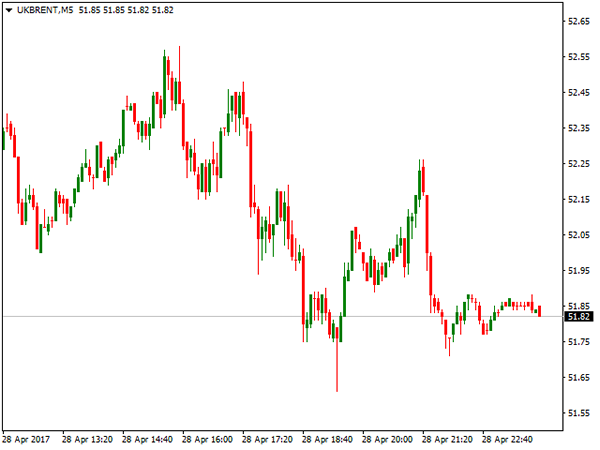 Natural Gas ended last week positively, gaining 5.8% for the week, after previous two weeks in red and formed bullish Engulfing pattern on the weekly chart that could be seen as initial bullish signal for continuation of larger bull-leg from $2.515, mid-Feb low.

Recent rally was supported by improving daily technical studies which showed fresh bullish momentum, however, overbought conditions may reduce the pace of rally which is eyeing target at 3.340, once firmer bearish signal will be generated. 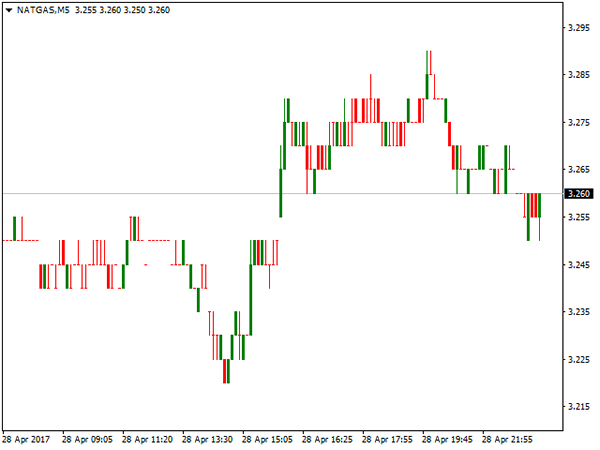 Spot gold kept within the range of $1260/70 during past three days after falling sharply on Tuesday that resulted in ending the second consecutive week in red. The yellow metal failed to capitalize from sluggish US data, after US jobless claims surged; consumer sentiment fell and GDP data showed that US economy suffered its weakest first quarter growth in three years. However, gold price managed to stabilize above important technical support at $1260 and stayed in consolidation range above the support for the past three days, which may signal basing attempt.

Further weakening of the dollar on weak US data would raise question about Fed’s rate hike decision in June policy meeting that may give fresh boost the US interest rate sensitive gold price.

From the technical point of view, current lows are seen as ideal end of corrective downleg from $1295 peak to keep broader uptrend intact for fresh attempts higher.

Stronger bullish signals could be expected on rise above pivotal $1278/80 barrier, clear break of which would unmask next targets at $1285 and $1295. 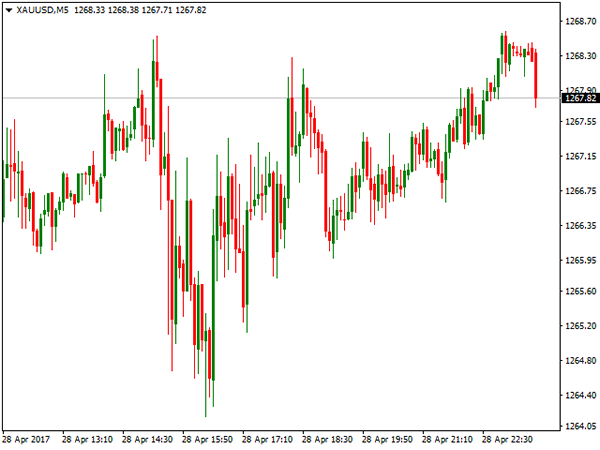 Spot Silver remained firmly in red for the second straight week and being down 3% for the week, on extension of steep descend from Apr 17 peak at $18.64. Strong bearish acceleration that has already retraced over 76.4% of Mar 15 – Apr 17 $16.81/$18.64 rally, threatens of final push lower to fully retrace the upleg. Bearish technical studies are supportive, however, the fall may be paused for corrective bounce on oversold daily conditions.

Initial resistances lay at $17.42/50, with another technical barrier at $17.80, expected to cap recovery attempts. 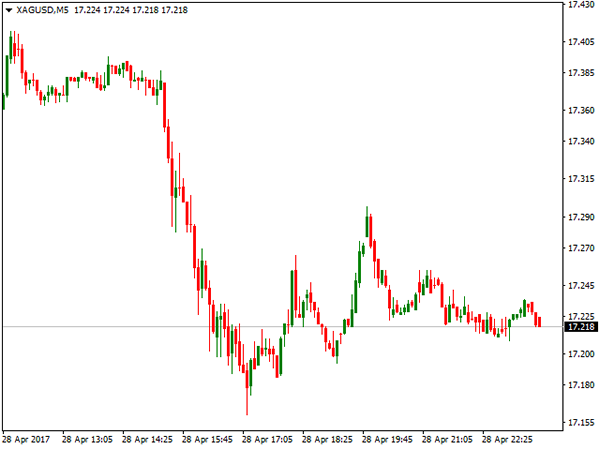 Copper managed to recover a good part of losses from previous three weeks and end week positively with weekly gain of 2.4%. Extension of bounce from 2.4935 low that was posted on Apr 19, turned near-term technical into bullish mode, supportive for further recovery. On the other side, recovery rally could be seen as limited correction of larger downtrend from 2.8215, peak of Feb 13, as rally faces strong barrier, shaped in daily Ichimoku cloud, spanned between 2.6490 and 2.6898, which may cap recovery, as overall structure remains bearish. 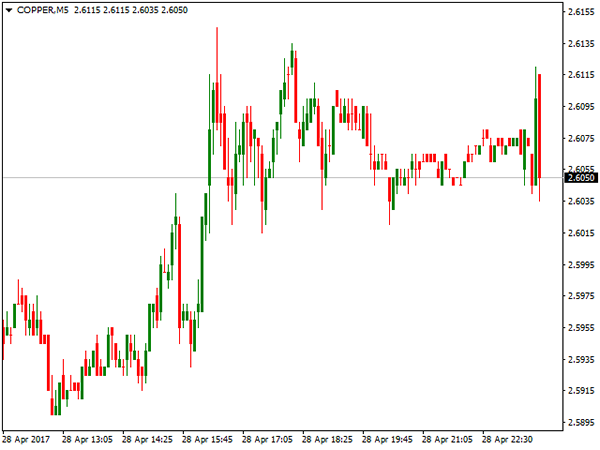 Global stocks were relieved on fall of tensions and uncertainty after the first round of French presidential election, as well as lowered geopolitical tensions that brought risk appetite back to play last week.

Dow Jones gapped-higher last Monday and rallied strongly, to post week’s high at 21010 on Wednesday. The rally which retraced over 76.4% of 21160/20310 corrective pullback, also broke above strong technical barriers and turned technical studies into bullish setup, would signal return to new record high at 21160 and possible resumption of broader uptrend.

Dow ended the second week positively and gained over 1% for the week shows strong signal of further upside. However, descending daily candles of past three days suggest that bulls are taking a breather after strong rally and extended correction on strongly overbought daily studies could be anticipated. 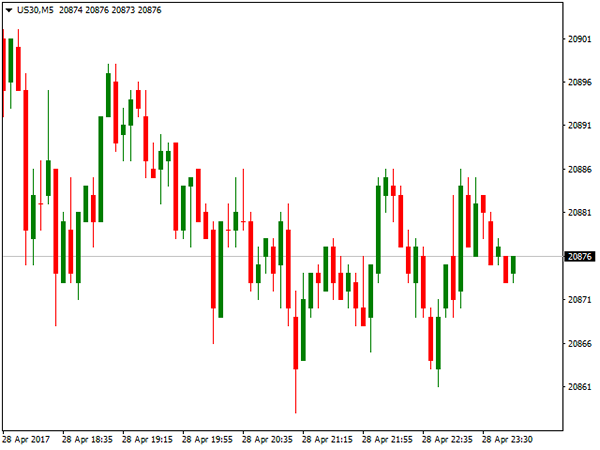 FTSE rallied strongly on Monday, after starting the day with gap-higher, driven by strong risk-on sentiment and peaked at 7247 on Wednesday, up over 200 points after record fall last week.

FTSE rally was capped by the base of thick daily Ichimoku cloud that kept recovery limited and returned downside risk in play.

Friday’s close below daily Tenkan-sen line (7160) could be seen as bearish signal for fresh weakness towards targets at 7139 and 7114. 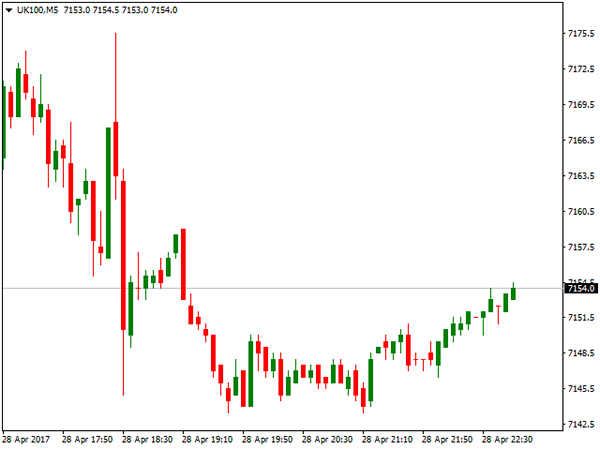 The EURUSD had a turbulent start of the week, opening with nearly 200-pips gap higher after results of the first round of French election showed Emmanuel Macron won the round, followed by his right-wing opponent Marine Le Pen. Markets were relieved from persisting fears of the victory of anti – EU candidate and likely Frexit scenario and appreciated on election results.

The pair peaked at 1.0950, where gains were capped by weekly 55SMA which guards psychological 1.1000 barrier, reinforced by weekly 100SMA.

Important support for the Euro comes from 200SMA which was broken on Monday’s surge and now acting as strong support at 1.0834, as the pair spent most of past week congested between 200SMA and 1.0950 barrier where multiple upside rejections occurred.

The pair is looking for firmer direction signal which will take the price out of current congestion. Overbought daily studies signal correction, but the price continues to trade above key 200SMA and holding in directionless near-term mode.

European Central Bank held its monetary policy on Thursday and stayed unchanged on ultra-low rates, as expected. On the press conference ECB President Mario Draghi signalled some improvement in the growth in Eurozone, but pointed that inflation is not expected to rise significantly this year and said that there were no talks of ending stimulus program that kept the Euro at the back foot.

Directionless action after strong jump at the beginning of the week signals that the Euro is seeking for stronger signals and awaiting the final round of French presidential election, due on May 7. 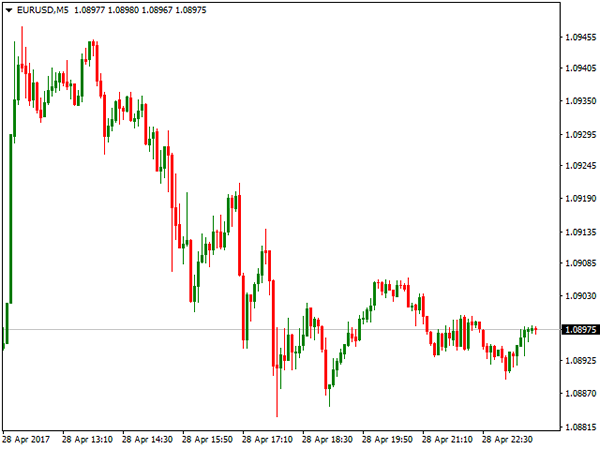 GBPUSD maintained positive tone during the past week, being ragged higher by Euro’s fresh strength. The pair hit new multi-month high at 1.2955 on Friday, exceeding previous week’s peak at 1.2904, posted after sterling’s surge on early election announcement. The pair maintained bullish tone during the week, holding firm bullish sentiment from the previous week and focusing psychological 1.3000 barrier in the near term.

Cable is on track for the second bullish weekly close that is seen as bullish signal as the pair eventually broke above 1.2000/1.2770 consolidation after post-Brexit fall bottomed at 1.2000 zone.

Near-term action is focusing 1.3000 barrier initially and may extend to 1.3110 (weekly Ichimoku cloud base) which marks next strong resistance. 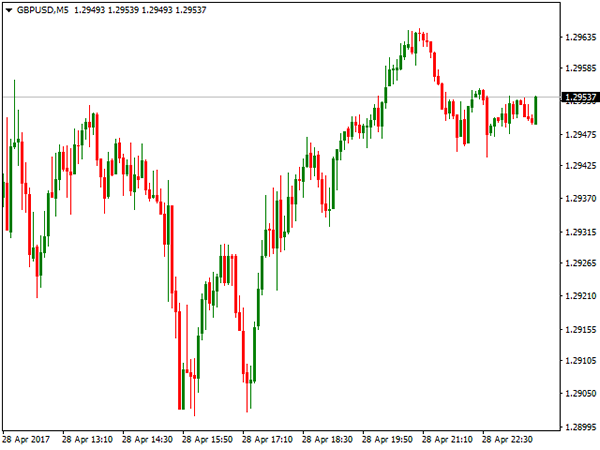 USDJPY pair was firmly bullish last week, as traders exited longs from safe haven yen after geopolitical tensions lowered and Frexit fears faded and moved into riskier assets that boosted the dollar. The pair is on track for the second bullish weekly close and looking for the close above weekly Ichimoku cloud top at 111.36 which was cracked on several attempts higher but gains were capped by weekly Tenkan-sen at 111.80.

USDJPY is ending month in long-tailed Doji candle, which could be seen as positive signal after strong downside rejection at 108.11 and subsequent strong recovery.

The Bank of Japan kept interest rates unchanged on their Thursday’s policy meeting but offered its most optimistic assessment of the economy in nine years, describing recent weakness in inflation as temporary and signalling strong optimism about the economy. 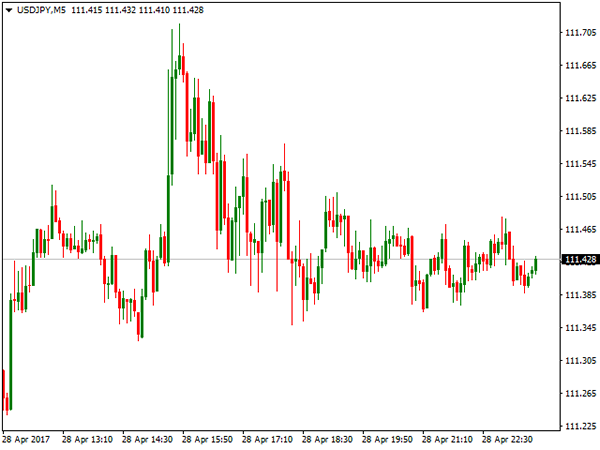 Australian dollar ended week strongly in red against it US counterpart, being down nearly 1.3% for the week. Aussie dipped to 0.7440, the lowest since mid-January. Bearish acceleration took out some very important technical supports and penetrated deeply into thick weekly Ichimoku cloud which offers strong support and signalled stronger retracement of Dec/Mar 0.7160/0.7747 ascend, after previous week’s action was capped at 0.7610 and this week’s trading was firmly in red.

However, the pair found support 0.7440 and bounced higher on Thursday after the markets were disappointed by long awaited president Trump’s tax plan, as plan offered no fresh surprises after being unveiled on Wednesday and failed to excite investors, sending the US dollar lower.

Aussie extended recovery on Friday, driven by renewed positive sentiment and profit-taking on strong weekly fall that pushed the price to close above broken former key support at 0.7472. 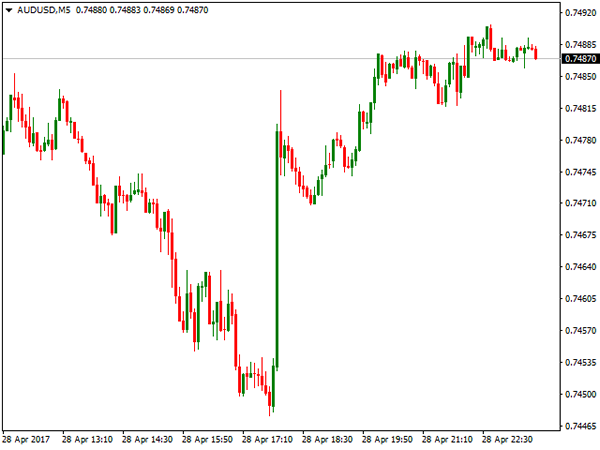 Canadian dollar ended the second straight week in negative tone against the US dollar, being down nearly 1.5% for the week and also losing 2.65% for the month. Loonie came under pressure earlier this week on comments on US/Canada lumber trade but regained ground on announcement of President Trump that he will not terminate the NAFTA treaty at this stage but will move quickly to begin renegotiating conditions with Canada and Mexico, for the benefit of all three countries.

However, CAD did not manage to hold gains longer and was driven lower again by broader US dollar’s uptrend, the last leg of which commenced from mid-April and took very strong technical barrier at 1.3573 (weekly Ichimoku cloud top) which could signal further strength of USDCAD pair. 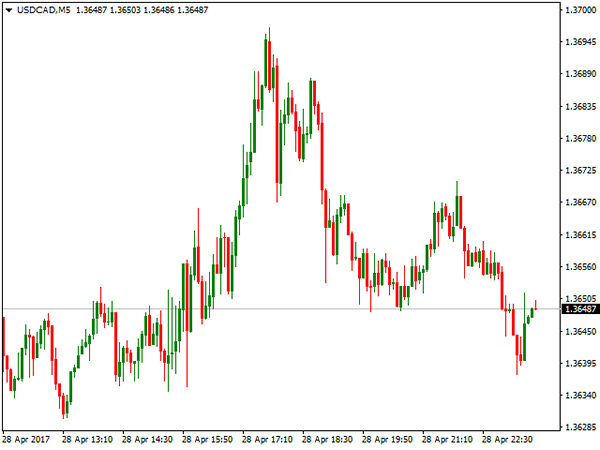