GBPJPY has been consolidating since September 24 and has been stuck in a channel with upper boundary the 149.50 resistance and lower boundary the 147.20 support. The pair lacks a clear trend in the short-term. However, it climbed above the 20- and 40-simple moving averages (SMAs), pointing to upside risks, and this is reinforced by the technical indicators. The RSI is ticking higher in the positive territory, while the MACD is moving sideways above the zero line.

If the price continues the slightly upside movement, it could touch the 149.50 – 149.70 resistance area taken from the highs on October 8 and September 21. A run above this region would open the way towards the 150.00 strong psychological level, achieved on May 18, shifting the neutral bias to positive.

Alternatively, should the price manage to head lower, it could hit again the lower boundary of 147.20 and the 146.95 support, breaking the trading range to the downside. In case of more losses the market could touch the 146.20 barrier, taken from the low on September 14.

Looking at the very short-term picture, the bias remains neutral since prices hold within a range, however, over the last two months GBPJPY posted higher highs and higher lows. 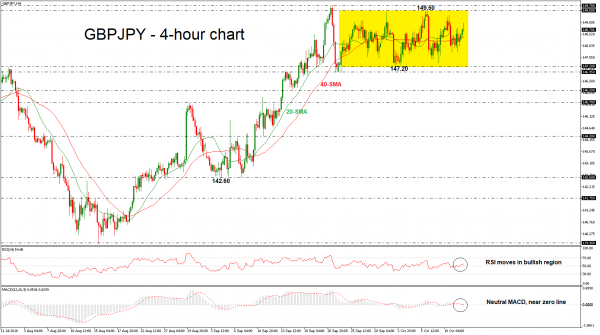