WTI oil consolidates above two-month low at $65.73, posted on Tuesday, when oil price fell nearly 5% in the biggest one-day loss since 11 July.

Strong negative sentiment was additionally boosted by latest comments from Saudi Arabia’s energy minister who said that the OPEC will act proactively and increase production in order to prevent any supply shortage.

On the other side, rising US crude inventories point to excessive supply that adds to negative stance, as concerns about potential stronger impact on global supply once US sanctions on Iran start, having showed mild impact so far.

Overextended daily studies suggest that bears may take a breather before continuing, with selling upticks strategy being favored.

Broken 200SMA ($67.44) should ideally cap and keep bears firmly in play, however, extended upticks cannot be ruled out and would face strong resistance at $69.60 (converging 10/100SMA’s). 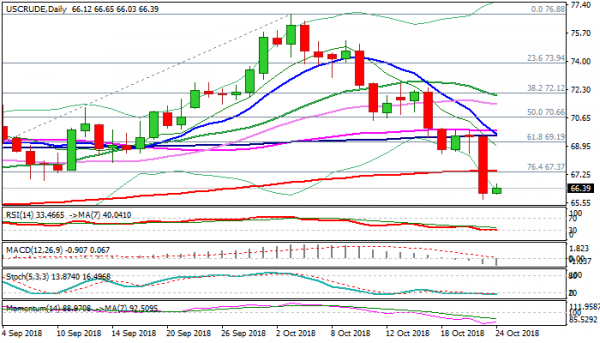 Crude Oil Slips Back Below The $33.66 Technical Resistance