The US Dollar started a major bullish wave from the 1.3120 support against the Canadian Dollar. The USD/CAD pair traded above the 1.3400 resistance and it remains supported on dips if there is a downside correction. 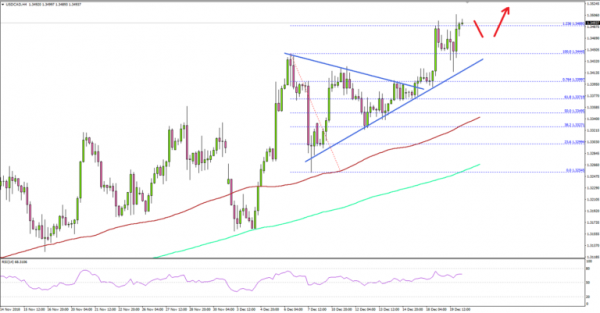 Fundamentally, the Canadian CPI figure for Nov 2018 was released by the Statistics Canada. The market was looking for an increase of 1.8% in the CPI in Nov 2018 compared with the same month a year ago.

Energy costs declined 1.3% compared with November 2017, following a year-over-year increase (+7.9%) in October. Gasoline prices fell 5.4% year over year, as declining global crude oil prices led to lower prices at the pump and the first 12-month decrease in the gasoline index since June 2017.

Overall, USD/CAD remains well supported on dips near 1.3400 and 1.3340, and it may continue to move higher in the near term.