The greenback closed generally higher in a dull Tuesday, although gains were shallow, and uneven across the board. The recovery came in the American afternoon, backed by a recovery in Treasury yields and as Wall Street traded once again in the green. The EUR/USD pair topped at 1.1267 early London, but was unable to extend its gains, despite the EU later released more encouraging macroeconomic data. The May Markit PMIs showed that German and the EU numbers held near six-year highs, confirming strong growth in the region. The services sector indexes ticked lower, but still came in strong. Additionally, the German IFO survey indicated that business confidence in the country remains strong, up to a record of 114.6 following April’s revised 113.00, with both the assessment of the current situation and expectations sharply up.

In the US, the Markit preliminary PMIs presented a similar behavior, with the manufacturing sector expanding, but the services one shrinking. The Composite PMI resulted at 56.8, matching April’s final reading. New Home sales, however, edged sharply lower after the strong March reading, down by 11.4% in the month against expectations of a 1.5% decline. Fed’s Kashkari was on the wires, expressing concerns over the decline in core inflation, adding to the latest dovish rhetoric.

The EUR/USD pair settled a few pips below 1.1200, and seems poised to correct lower, although in the longer term, is too early to confirm an interim top. In the 4 hours chart, the price has found some support around a bullish 20 SMA, whilst technical indicators turned sharply lower from overbought levels, currently pressuring their mid-lines and ready to break lower. The pair has an immediate support at Monday’s low of 1.1161, while a stronger one comes at 1.1080. Approaches to this last will likely attract buying interest. Back above 1.1220, the risk turns towards the upside, with room then to extend the advance up to 1.1300. 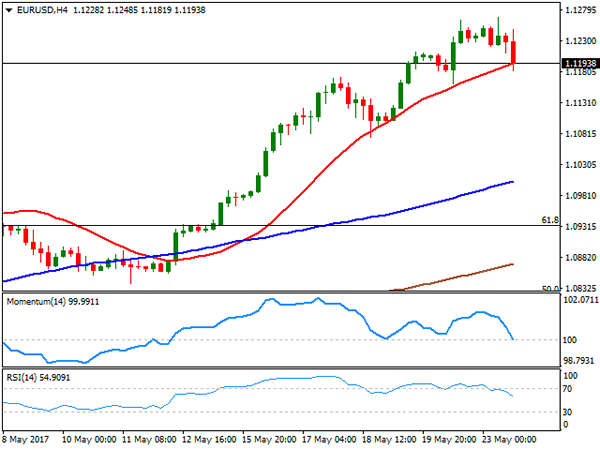 Having traded within a tight range ever since the week started, the USD/JPY ended up this Tuesday, surging alongside with US Treasury yields. The recovery, however, was not enough to change the neutral stance seen over these last few days, as the pair remained well below 112.00, ending around 111.50 after peaking at 111.78. Yields advanced after a local auction, although the movement was quite shallow, with the 10-year benchmark settling at 2.26% from previous 2.25%. BOJ´s Governor Kuroda will be on the wires during the upcoming Asian session, but is not expected to surprise markets with a change in the monetary policy bias. Technically, the 4 hours chart shows that the price has settled midway between the 50% and the 61.8% retracement of the latest bullish run, while moving averages remain flat, as technical indicators keep lacking directional strength, currently within neutral territory. The risk remains towards the downside, albeit only a downward acceleration through 111.00 will confirm additional declines. The bearish pressure will likely ease on a break above 112.00, but gains are hardly expected to extend beyond 113.00 this week. 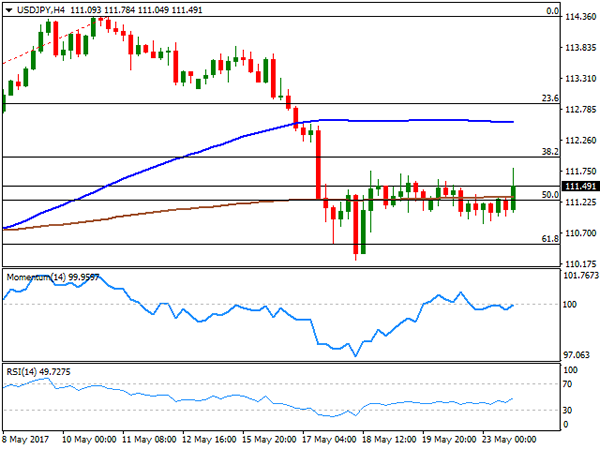 The GBP/USD pair eased at the beginning of the day, hit by a terror attack that took place in Manchester late Monday. The pair traded as low as 1.2952, but managed to bounce back, although held below the 1.3000 threshold for most of the day. There was a short-lived up-tick that reached 1.3030 around London’s fix, but the pair settled around 1.2980, indicating that speculative interest is now preferring to sell spikes, somehow anticipating additional declines ahead. There were no big news coming from the UK this Tuesday, and the calendar will remain light until next Thursday, when the UK will release a revision of Q1 GDP. Still, little action is expected around Pound’s crosses ahead of the UK election, and fresh news over Brexit negotiations. Technically, the neutral stance seen on previous updates persist with the 4 hours chart showing that the price keeps hovering around a directionless 20 SMA, whilst the Momentum indicator heads lower, right below its 100 level, and the RSI aims higher around 52, diverging from each other but both lacking strength. Below 1.2890, the pair can extend its decline towards 1.2830, the base of the wider range that will likely keep holding ahead of the big events to come. 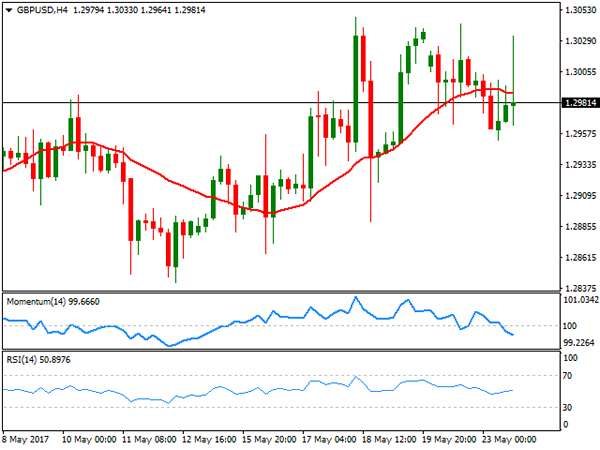 Gold prices retreated from near a three-week high of $1.263.72 a troy ounce reached at the beginning of the day, settling around 1,250.90, not far from its daily low. There were little news affecting particularly gold, and those released, were in fact gold positive, as Fed’s Kashkari made some dovish comments, expressing concerns over the recent decline in core inflation, and therefore weighing on chances of a rate hike next June. Nevertheless, the commodity fell, as the dollar gathered momentum against most of its rivals during the US afternoon. Technically, the daily chart shows that indicators have turned south within positive territory, whilst the price holds above its 20 and 100 DMAs, both converging today at 1,241.10, still lacking directional strength. Shorter term, and according to the technical picture has turned bearish, given that technical indicators have entered negative territory, maintaining their downward strength, whilst the price broke below its 20 SMA, now flat around 1,255.45, providing resistance for the upcoming session. 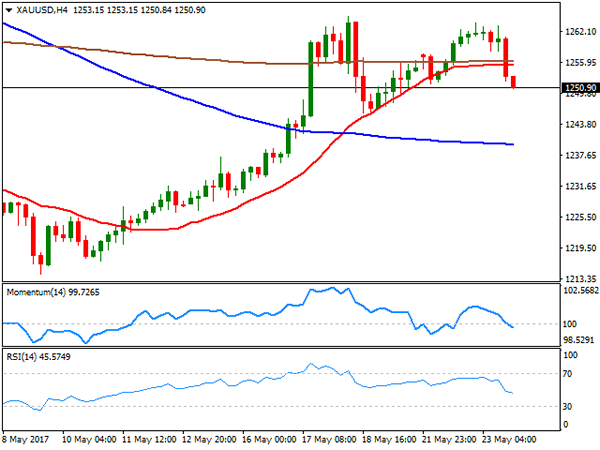 Crude oil prices advanced further this Tuesday, with West Texas Intermediate futures settling at $51.40 a barrel, its highest since mid April. The commodity recovered from a daily low of 50.56, achieved early US session as the White House unveiled its budget proposal, which includes reducing national debt by selling off half of the nation’s Strategic Petroleum Reserve and allowing drilling in the Alaska National Wildlife Refuge. Speculation that the bill will hardly pass the Congress have taken out some of the pressure, whilst hopes of another drawdown in US stockpiles and of an extension of OPEC’s output cut backed a new leg higher. Daily basis, the commodity has advanced further above its 100 DMA after closing around it for the first time in a month this Monday, whilst technical indicators aim modestly higher near overbought readings, supporting additional gains. In the 4 hours chart, a bullish 20 SMA keeps leading the way higher, now providing support around 50.70, while technical indicators have turned horizontal, but within positive territory. 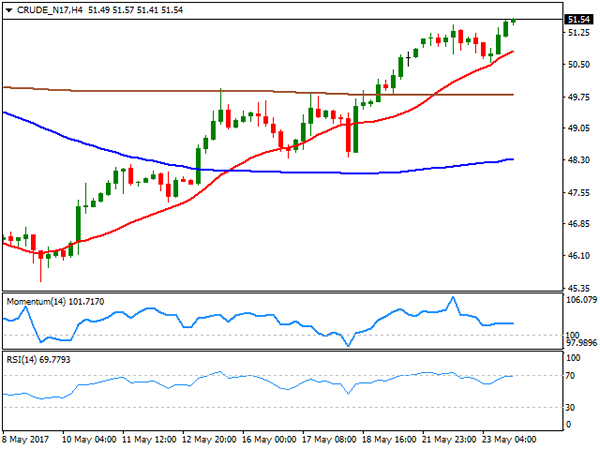 US equities followed the lead of their European counterparts, ending the day with modest gains. The Dow Jones Industrial Average advanced for a fourth consecutive day, up 0.21% or 43 points, to 20,937.91. The Nasdaq Composite added 0.08% and settled at 6,138.71, while the S&P added 4 points, to 2,398.42. Within the Dow, Goldman Sachs led advancers, adding 1.68%, followed by Caterpillar which added 1.34%. Home Depot, on the other hand, led decliners with a 0.67% loss, followed by Walt Disney that shed 0.57%. The daily chart for the Dow shows that the index recovered above its 20 DMA that anyway remains flat, whilst the RSI indicator entered positive territory, now heading north around 55. The Momentum however, holds below its 100 level, reflecting the limited intraday advance. Short term, the 4 hours chart presents a generally positive stance, as the benchmark holds above all of its moving averages, with the Momentum also faltering, heading south above its mid-line. 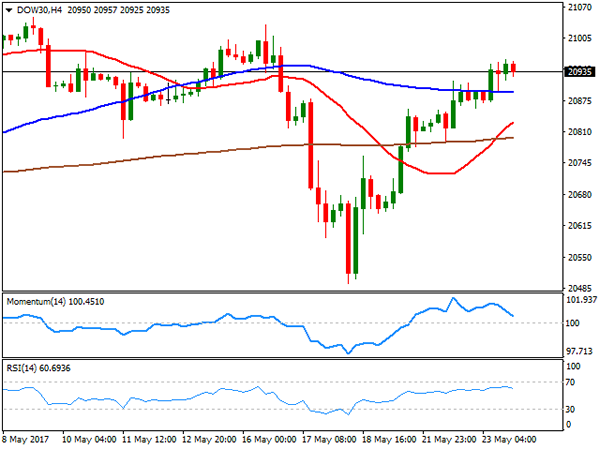 The FTSE 100 ended the day at 7,485.29, down 11 points or 0.15%, trimming early gains as the Pound bounced from a fresh weekly low. Mood was subdued amid the terror attack in Manchester, further weighed by rising public sector net borrowing, up in the month by the highest amount since 2014. Babcock International led advancers, adding 2.97%, followed by EasyJet that gained 2.52%. The losers’ list was led by Kingfisher that lost 2.42%. The advance in Wall Street helped the London benchmark to regain the 7,500 level in after-hours trading, overall maintaining the positive tone seen on previous updates. Daily basis, the Footsie is still way above a bullish 20 SMA, whilst technical indicators hold near overbought readings, but with no clear directional strength. In the 4 hours chart, an intraday decline was quickly reverted after the index touched its 20 SMA, now around 7,481, while technical indicators retreated modestly from near overbought readings, not enough to suggest an upcoming bearish move. 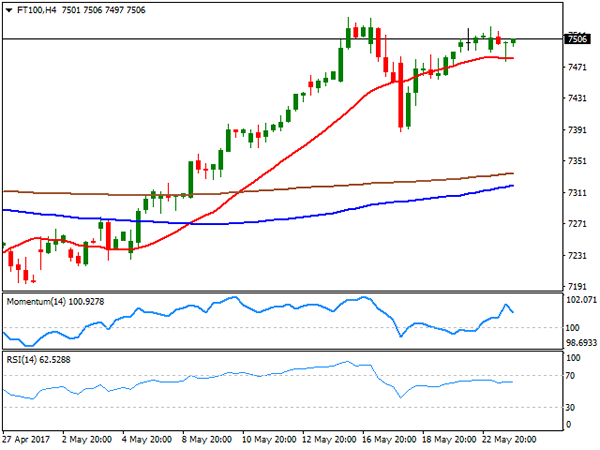 The German DAX added 39 points this Tuesday, closing at 12,659.15, with financials and energy-related equities leading the advance. Strong German macroeconomic figures backed the rally, as business confidence in the country, according to the IFO survey, peaked at 114.6 in May, its highest on record. E.ON led gainers with a 3.66% gain, followed by ThyssenKrupp which added 2.0% Among banks, Deutsche added 1.12%, whilst Commerzbank closed 0.76%. Daimler was the worst performer, down by 1.29% as auto-parts sales sunk in the US, affecting the sector. The technical picture for the DAX is modestly positive, as it keeps hovering around a horizontal 20 SMA, whilst technical indicators barely hold above their mid-lines, without directional strength. In the 4 hours chart, the technical picture is quite alike, as the index managed to surpass a still bearish 20 SMA, whilst technical indicators head nowhere within neutral territory. 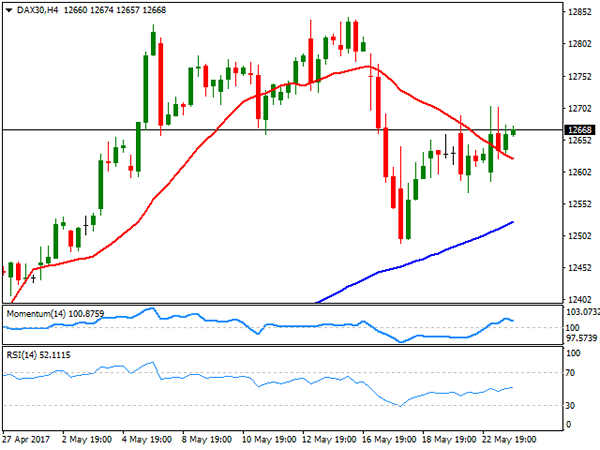