Brent crude oil futures are holding slightly below the three-month high of 64.80 after the aggressive bullish run above the ascending sloping channel. The MACD oscillator suggests that the market might improve in the coming sessions as it is moving upwards, however, the RSI indicator seems to be overbought as it reached the 70 level in the 4-hour chart.

Should the price move higher, it would increase the chances for an extension of the bullish correction and would challenge the next critical level of 68.35, identified by the peak on November 16.

On the flipside, if the price manages to drop below the upper band of the channel, nearby support could come from the 63.60 barrier, which stands near the 23.6% Fibonacci retracement level of the upward movement from 58.90 to 64.60, around 63.40. A decisive close below the latter level would drive the price towards the 20-simple moving average (SMA) currently at 62.90.

In the short-term picture, the price currently stands above the bullish cross within the 20- and 40-SMAs and the structure has turned to a more bullish one. 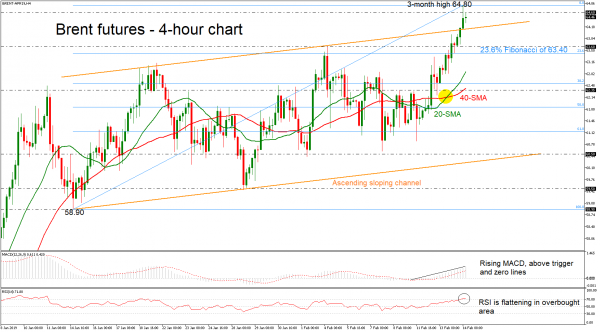 Upside in Crude Oil Prices Limited: OPEC+ Cut Prone to Ease Next Month while US Inventory Gained on Imports