After a major decline from the 112.13 high, the US Dollar found support near 110.75 against the Japanese Yen. The USD/JPY pair corrected higher above 111.20 and it seems to be following a bullish path. 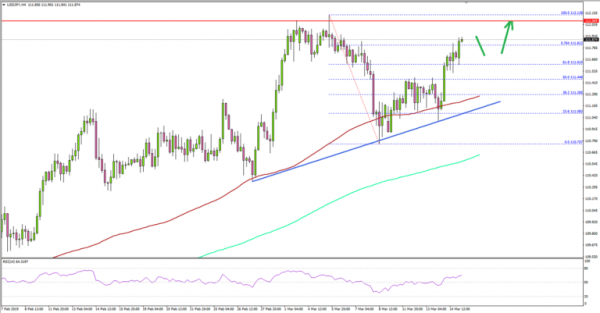 Looking at the 4-hours chart, the pair gained traction this week and climbed above the 111.00 resistance. There was even a close above 111.15 and the 100 simple moving average (red, 4-hours).

Fundamentally, the US Initial Jobless Claims figure for the week ending March 19, 2019 was released by the US Department of Labor. The market was looking for a minor increase in claims from 223K to 225K.

The report added that:

In the short term, the US Dollar could correct lower, but USD/JPY seems to be well supported on the downside near 111.15 and 111.10.

GBP/USD Attempts To Recover After A Pullback