EURUSD is pushing hard to enter the 1.13 neighbourhood and pierce its 50-day simple moving average (SMA) after a bullish week. Technically, the risk seems to be skewed to the upside as the RSI is holding a positive slope above its 50 neutral mark and the MACD continues to distance itself above its red signal line. However, with the stochastics fluctuating near overbought territory, any gains could come limited.

On the downside, support could immediately appear near 1.1268 which if broken could send the price down to the 1.1200-1.1175 restrictive zone. Beneath the latter, the sell-off could pick up speed towards 1.1060, a frequently tested level in 2016.

In medium-term picture, EURUSD is in a downtrend since early January and only a decisive close above the 200-day SMA could increase hopes for a bull market. 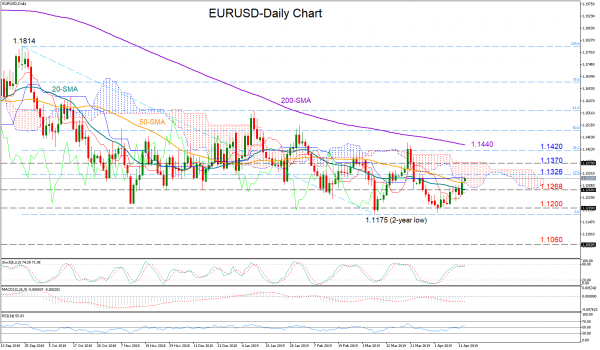