EURUSD is looking bearish in the short term after creating a descending channel over the last three months. Also, the price declined beneath the moving averages on Thursday and the technical indicators are all pointing to further negative momentum. The stochastics are heading south with the %K line entering the oversold zone, suggesting plenty of scope for additional bearish moves. The MACD is ready to cross below its trigger line in the negative zone.

Immediate support to further losses would likely come from the 21-month low of 1.1175 before heading towards the lower boundary of the channel around the 1.1115 support. Failure to hold inside the downward range would endorse the focus to the downside and attention would increasingly turn to the 1.0900 psychological level, reached on March 2017.

On the flipside, if the bearish movement lost steam and the pair reversed higher, resistance would initially come from the 20- and 40-day simple moving averages (SMAs) currently at 1.1250 and 1.1280 respectively. Rising above these lines could take prices towards the 23.6% Fibonacci retracement level of the downleg from 1.1815 to 1.1175, which overlaps with the 1.1325 resistance. If there is a successful jump above this barrier, the price could rest near the falling line of the channel around 1.1350.

Overall, EURUSD could lose further ground as there is enough room until another touch of the lower boundary of the channel. 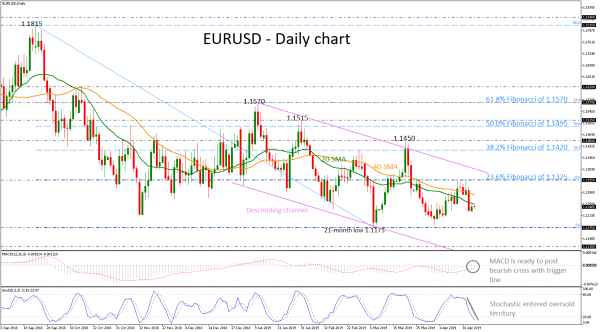