BTCUSD skyrocketed to a fresh eleven-month high of 8360 earlier today, but it quickly pared some of the gains, returning lower near the 20-simple moving average (SMA) in the 4-hour chart. The price is capped by the red Tenkan-sen line, suggesting a possible bearish correction while the technical indicators are also pointing down. The stochastic oscillator bounced off the overbought territory and the MACD slipped beneath its trigger line and is losing momentum.

In case of further bearish action, immediate support is coming from the 7590 barrier, taken from the latest lows before touching the 23.6% Fibonacci retracement level of the upleg from 3644 to 8360 around 7250. A successful close below this level could see a retest of the 40-SMA currently at 6965.

However, if prices are unable to post a negative correction in the short term, the outlook would shift back to the upside, with the eleven-month high of 8360 coming into focus again. Above this level, the next target could be faced near the 8560 resistance, taken from the high on May 2018.

Concluding, in the medium-term, bitcoin has a strong ascending tendency over the last five months, however, it seems to be overstretched in the short-term, flirting with a downside retracement. 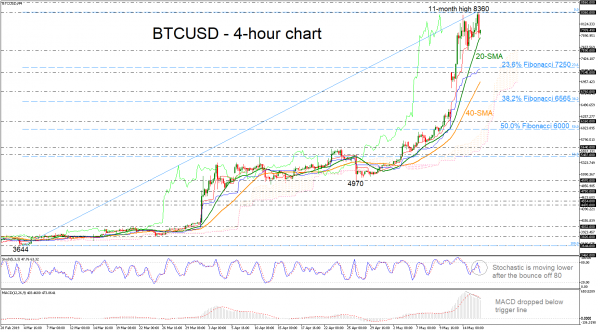