Selling interest is continuing in the AUDJPY market, pushing the price towards a new four-month low of 75.37. The price is also holding beneath the red Tenkan-sen and the blue Kijun-sen lines, while the MACD is strengthening its bearish momentum below zero. The RSI is bearish as well, though under its 30 oversold mark. Another signal for more sell-off is the negative crossover within the 20- and 40-simple moving averages (SMAs) in the daily timeframe.

Should negative pressure strengthen, support could come around the 74.50 barrier, identified by the lows on June 2016. The 72.30 level and the ten-year low of 70.20 registered on July 2017 could be the next key levels to watch, shifting the medium-term outlook even more bearish.

On the other hand, a rebound on the 74.50 hurdle could send the price until the red Tenkan-sen line, which currently stands near 76.70. Above this level, the 20-day SMA, which overlaps with the 77.50 barrier could be another target for investors to have in mind. Even higher, there are several resistance obstacles such as the Ichimoku cloud and the 40-SMA ahead of the 80.70 top.

In the short-term, the downfall from the 80.70 barrier opened the way for a new downside rally. A successful drop below 74.50 could add more fuel to the bears. 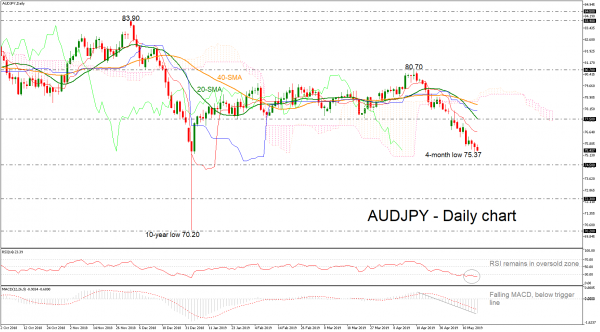 USD/JPY Outlook: Traders Move Into Safe-Haven Ahead Of President Trump’s Speech On China