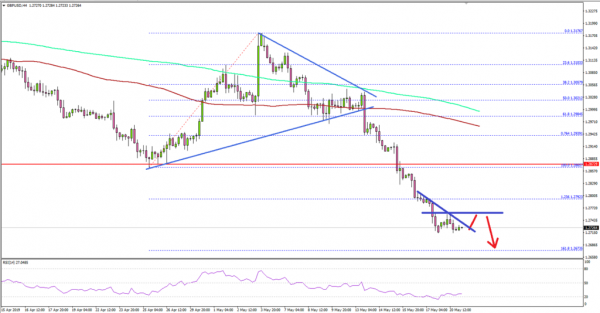 Looking at the 4-hours chart, the pair topped near the 1.3055 level and started a strong decline below the 100 simple moving average (4-hours, red). The decline was initiated after the pair traded below a crucial triangle support at 1.2995.

Fundamentally, the Chicago Fed National Activity Index for April 2019 was released by Federal Reserve Bank of Chicago. The market was looking for a decline in the index from -0.15 to -0.33.

The actual result was disappointing, as there was a sharp decline in the Chicago Fed National Activity Index to -0.45. On the positive side, the past reading was revised up from -0.15 to 0.05.

Overall, GBP/USD is clearly in a strong downtrend and the current technical indicators suggest more downside towards 1.2650 in the coming sessions. Similarly, there could be more downsides in EUR/USD towards 1.1100.