On Wednesday morning, the EUR/USD traded below the 1.1170 level.

In general, the rate was expected to decline in the near term future. Namely, the currency exchange rate was set to meet with the resistance of the 100-hour simple moving average and a previously broken trend line, which began to provide resistance near 1.1165 during midnight.

These resistance levels should cause a decline, which would decline as low as 1.1120. Down to that level there are no other technical support levels.

On the other hand, high volatility and breaking of technical charts could be caused by the US Federal Reserve’s Federal Open Markets Committee Meeting Minutes publication at 18:00 GMT. Watch the preview analysis done by our community member Skyisthelimit. 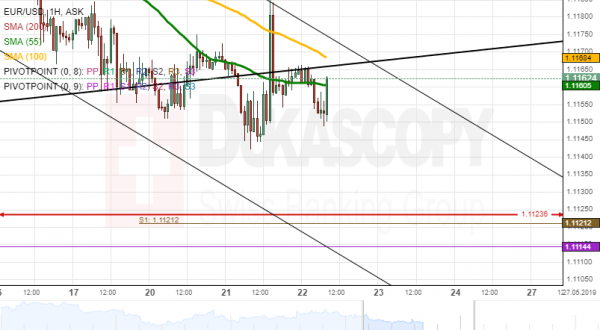 No Fireworks at ECB Meeting, but PMIs Could Drive Euro

EUR/GBP: Brexit and BOE and Bears, Oh My!