Earlier this month, EUR/GBP retested the key 0.8480 support area and later started a strong upward move. The Euro broke many hurdles and moved into a positive zone above 0.8750 against the British Pound. 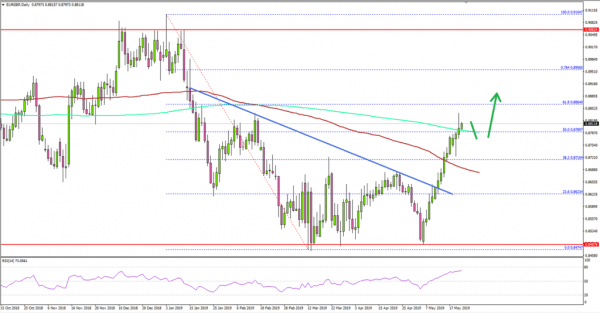 Looking at the daily chart, the pair formed more than twelve green candles from the 0.8489 swing low. During the rise, the pair broke many important resistances near 0.8600 and the 100-day simple moving average (red).

Moreover, the pair traded above a major bearish trend line with resistance near 0.8640 on the same chart. Finally, there was a break above the 50% Fib retracement level of the major drop from the 0.9104 high to 0.8474 low.

Conversely, if EUR/GBP starts a downside correction, it could find support near 0.8750. However, the main support is near 0.8680 and the 100-day simple moving average (red).

Fundamentally, the UK Consumer Price Index for April 2019 was released by the National Statistics. The market was looking for a 2.2% rise in the CPI compared with the same month a year ago.

The actual result lower than the forecast, as the CPI increased 2.1%, but it was better than the last 1.9%. Looking at the monthly change, there was a 0.6% rise in the CPI, less than the 0.7% forecast.

The Consumer Prices Index including owner occupiers’ housing costs (CPIH) 12-month inflation rate was 2.0% in April 2019, up from 1.8% in March 2019. Rising energy prices and air fares, which were influenced by the timing of Easter, produced the largest upward contributions to change in the rate between March and April 2019.

Overall, EUR/GBP is showing a lot of bullish signs on the daily chart and it could continue to grind higher in the medium term towards 0.8900, 0.8950 or even 0.9000, considering the recent downward pressure on GBP/USD.