USDCAD was trading not too far from yesterday’s one-week high of 1.3501 on Friday, having pulled back slightly. But momentum indicators suggest there is still some upside for the pair to advance again.

The near-term bias is looking neutral-to-bullish as the RSI is flatlining above the 50-neutral level, while the stochastics are pointing north and the %K and %D lines remain positively aligned.

The neutral-to-bullish picture also holds true for the medium-term outlook as the pair has been consolidating following the sharp downside correction in January. Price action at the moment is above the Ichimoku cloud so the risks are to the upside.

Should USDCAD make another run higher, it’s likely to meet resistance at 1.3510 as this level has strongly capped prices since late April. A successful break above this key resistance area would open the way for the 19-month high of 1.3664 reached on December 31. But before then, USCAD might need to overcome another hurdle at 1.3565 – a previous support level.

If the soft positive momentum fails to hold and prices turn lower, the red Tenkan-sen line at 1.3435 is the nearest support that could halt steeper declines. A potentially more important support, though, is the 50-day moving average just above the 1.34 handle. If breached, it would shift the focus to the downside and prices would slip inside the Ichimoku cloud, erasing any remaining positive bias.

In the bigger picture, USDCAD would need to make a sustained climb above 1.3510 in order for the outlook to become convincingly bullish. 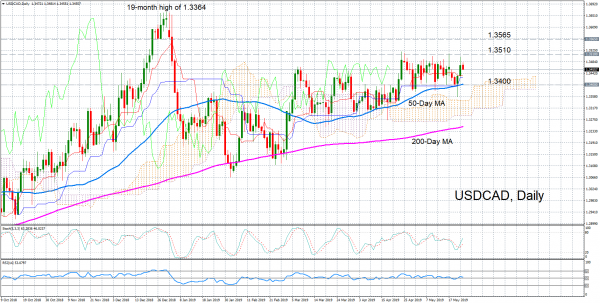