Gold is relatively stable today after a strong three day run that’s seen is gain around 3.5% and burst back above $1,300.

The yellow metal is now trading back around three month highs and looking in a strong position, especially if central bank easing is going to become the theme for the rest of the year. The dollar, as ever, will play a big role in how far this will go and it is looking vulnerable. 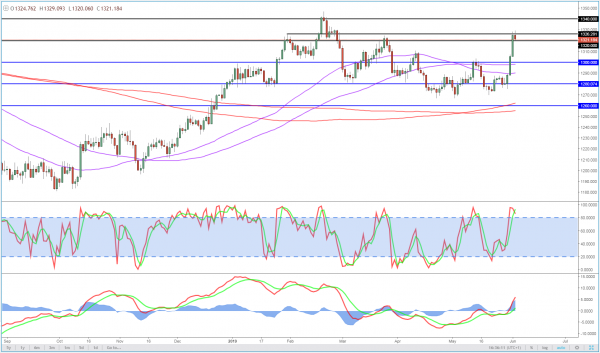 The dollar index has found support today around the May lows but I’m far from confident that will hold for long and a break could be the trigger for another sizable drop. This should naturally be good news for gold, which typically benefits when the greenback is struggling. There is plenty of potential resistance ahead for gold though but a weaker dollar would clearly help.

Time will tell whether markets are getting too carried away with various Fed comments but it seems traders are convinced that a rate cut is in the offing. With traders responding so strongly to these hints, there’s little reason to believe we won’t see more in the coming weeks.

This all puts more focus on the US jobs report this Friday, with a bad set of numbers likely further convincing traders that a cut is coming and warranted. What’s more, a June hike is still not priced in – only 10% according to Reuters Eikon – and a poor report on Friday could change that.

There’s still plenty of resistance above for gold, most notably this year’s high but even just above here, gold has struggled around $1,360 over the last few year. This will likely be challenging for gold bulls again but if they can break above, it could be the catalyst for another big push.