Copper futures for July delivery have unsuccessfully attempted to pierce the upper boundary of the one-month old descending channel (2.695) on Tuesday.

The positive momentum in the MACD signals that upside pressures may return in the short-term, but the price may first need to crawl comfortably above 2.711, the 61.8% Fibonacci retracement of the 2.539-2.991 bullish wave, to fuel a stronger buying interest. On the way up, the 50% Fibonacci and the 200-day simple moving average (SMA), could hostage the bulls. If not, then the 38.2% Fibonacci of 2.818 could next take control.

Staying within the channel, support could be initially detected near the previous trough of 2.596 before all eyes shift to the bottom of the channel and the January low of 2.539.

Meanwhile, the falling 50-day SMA, which is not far above the longer-term 200-day SMA raises the stakes for an even bearish outlook in the medium-term timeframe. 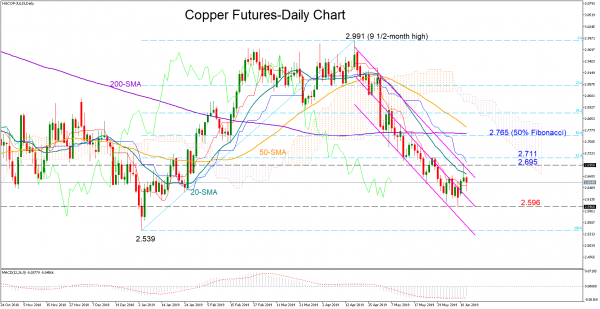