The Aussie Dollar failed again to gain momentum above 0.7000 against the US Dollar. The AUD/USD pair topped near 0.7020 and recently started a major downward move. 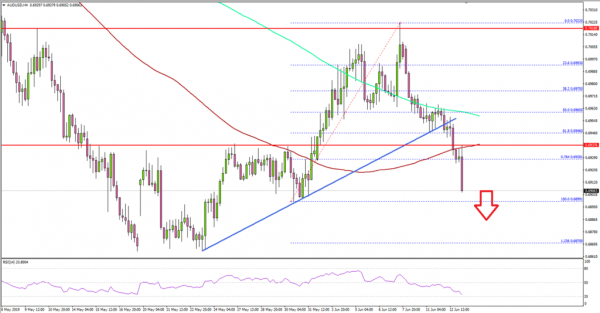 The pair traded below a major bullish trend line with support at 0.6955 on the same chart. Moreover, there was a break below the 0.6935 support and the 100 simple moving average (red, 4-hours).

Fundamentally, the Australian Employment Change figure was released by the Australian Bureau of Statistics. The market was looking for a 17.5K change in May 2019.

The actual result was mixed as the Employment changed 42.3K, but there was no drop in the unemployment rate from 5.2% to 5.1% (as per the market forecast).

The report stated that:

Overall, the market did not like the outcome, resulting in a sharp drop. There could be a final downward push in AUD/USD towards 0.6900 or 0.6870 before it starts a decent upward move.