WTI oil price was a tad lower in Europe on Monday after advancing last Thu/Fri on rising tensions in the Middle East after two tankers were attacked in Gulf. Overall structure remains bearish as fears of lower global demand on persisting trade tensions that may escalate, keep oil price under pressure and offsetting for now attempts of OPEC+ to extend agreement for reduced production in order to stabilize oil market. Monday’s price action remains below 10SMA (currently at $52.61) which tracks the price for almost one month and capped last week’s recovery attempts, maintaining bearish bias. Weakening momentum adds to negative outlook, with repeated close below 10SMA expected to increase risk of revisiting base at $50.59/71, which marks key near-term support. Break here would signal continuation of two-month downtrend from $66.58 and test of psychological $50 support. On the other side, close above 10SMA would provide relief, but lift above 10June recovery high (54.79) is needed to signal reversal. 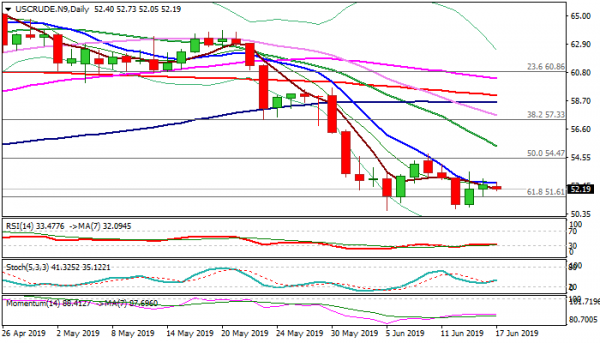