Netflix stock experienced a short-term upside rally from the bottom boundary of the trading range for the last month, that began at the end of April, to the upper boundary of a seven-month high of 386. The stock has temporarily faltered near the resistance, waiting for the buyers’ and sellers to set the direction.

Although in a sideways move, the short- and medium-term simple moving averages (SMAs) of 14-, 21- and 40-day SMAs, confirm a positive momentum on price action which have temporary strength, with their bullish crosses. The MACD and the RSI have flattened in the positive area, both showing that momentum in the short-term has wavered. However, the ADX is showing a strong trend above 25 level, but currently stands near 32 and is moving away from the line, indicating further increases.

Currently the stock is neutral, waiting for a definitive direction to unfold, and if the price breaks the upper boundary of the range, the near-term obstacle could be close to the all-time highs of 419.57 and 422.26.

Overall, in the long-term, Netflix stock seems to be strongly positive despite the latest sideways move in the near term. 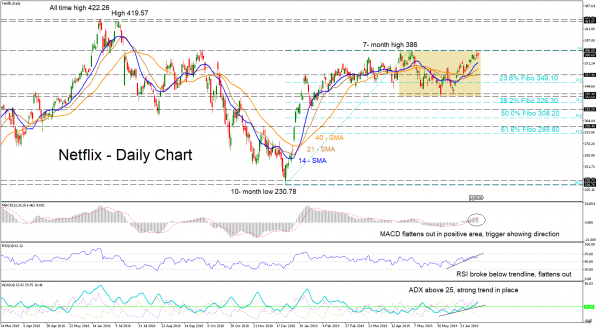 Currencies: EUR/USD Holding North Of 1.1066 Support, At Least For Now

Risk Aversion Dominates on Concerns of Coronavirus Outbreak in China