Gold lost steam in the last weeks, after a rally that began at the beginning of June. Price moved sideways after the break above the upper boundary of the three-year and five-month trading range, of 1366, and is currently trading between the short-term simple moving averages (SMAs) of the 14- and 21-day SMAs.

Momentum indicators suggest a short-term neutral bias, as the MACD and RSI flatten out in positive areas. The Chikou span is pointing up and above the price, with the averages of the Ichimoku indicator flat as well. The ADX at 30 suggests the uptrend still stands strong.

Although medium-term view remains positive, and should it hold up, there would be an immediate retest of the high of 1437.60 and the six year high of 1439.04.

Summing up, the short-term view is neutral, even though a general positive outlook exists. 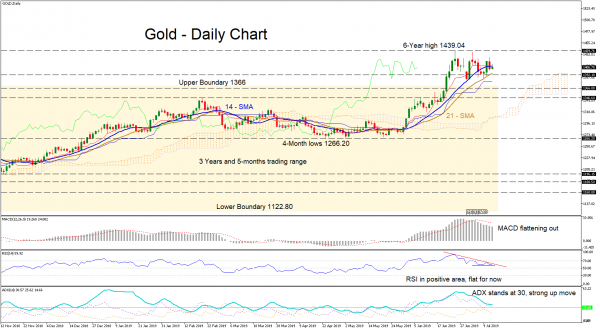 XAU/USD Forms A Lower High. Will The Declines Continue?

Is It All About To Go Wrong In Hong Kong?