EURUSD is under pressure again after finding support around 1.1196, which is the 23.6% Fibo retracement of the up leg from 1.1026 to 1.1249 and the 1.1180 level from June 18. After failed attempts to move above the downtrend line, the pair has traded between the 100- and 200-period simple moving averages (SMAs) for the past week. The bears have gained some strength and are pushing for lower, testing the 100-SMA.

The MACD and the RSI’s picture suggest a restart in the negative directional momentum, as the MACD remains below its trigger line and is approaching the zero line from above, whereas the RSI has declined below the 50-level trying to break the uptrend line downwards. Despite this view the 50-SMA warns of a possible continuation of a sideways move.

If price manages to pierce below the 100-SMA of 1.1163 where the 38.2% Fibo also lies, some interruption to the down move could come from the 50-SMA and Ichimoku cloud slightly lower. If the bears pick up momentum, the next support may come from 1.1138 which is the 50.0% Fibo and outer band of the cloud. Only a penetration of the strengthened support region of 1.1150 – 1.1106 could bring focus back to the twenty-six-month low of 1.1026 from August 1.

To the upside, if price climbs higher than the 200-SMA and smashes through the downtrend line, the swing high of 1.1249 could be tested, before turning to the higher peak around 1.1280.

Summarizing, the long- and medium-term bias is bearish, with the short-term looking neutral-to-bearish. But traders should be cautious of a move north past 1.1249 which may shift the short-term to neutral. 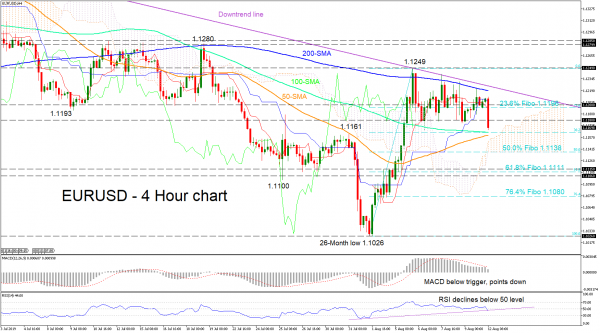