EURJPY printed a new 2-year low at 117.50 on Monday and despite entering oversold territory the bearish bias has not fully faded yet as the RSI continues to point downwards below 30, the MACD is extending its negative momentum under its red signal line and the red Tenkan-sen is distancing itself below the blue Kijun-sen. Trend signals are also viewed negative as all simple moving averages (SMA) are sloping downwards, with the price fluctuating comfortably below the lines.

Otherwise, if the market resumes positive mode above the January low of 118.60, the 20-day SMA currently at 119.90 could react as resistance. Higher, a rally above the previous peak of 121.36 could further boost buying interest, probably towards 122.40. Yet only a decisive close above the descending line currently seen around 123.00 would violate the downward pattern from the 133 top, confirming the start of a new bullish phase.

In the medium-term picture, a strong upturn above 125.00 is required to establish a positive outlook in the market.

Overall, EURJPY is holding a bearish profile both in the short- and the medium-term, though upside corrections in the near term cannot be ruled out as the market seems to be trending in oversold area. 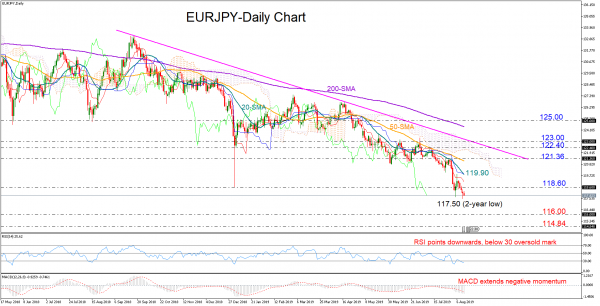