EURUSD appreciated, taking back more than half of two weeks of losses. The bulls are eyeing the downtrend line, but it seems that the move up has hit a ceiling as the upside momentum has evaporated, something also indicated by the RSI as it has flattened at the 50-level.

The 200- and 100-day simple moving average (SMA) are declining slightly sideways, whereas the 40-day SMA has dropped and merged with the downtrend line implying that the bearish bias is prevailing also in the short-term. Furthermore, the MACD although slightly above its red trigger line in the negative region, suggests that some downside movement cannot be ruled out.

Overall the medium- and short-term bias is bearish, but a close above 1.1285 could turn the bias back to neutral. 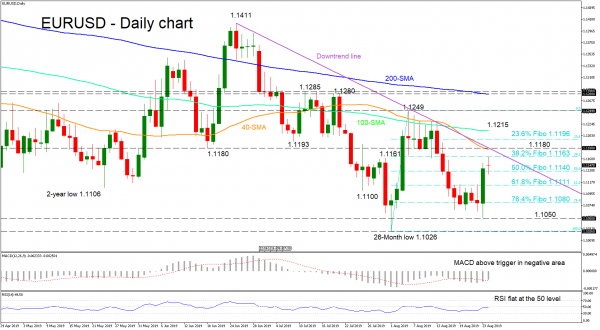