Cable is trading within narrow range in European session on Wednesday and remains capped by Fibo barrier at 1.2370 (50% retracement of 1.2783/1.1958), where the action in past two days failed to register clear break higher.

The price managed to penetrate daily cloud after two unsuccessful attempts, but Tuesday’s action ended in long-legged Doji candle, signaling indecision, as bears might be running out of steam.

Fundamentals remain supportive as no-deal Brexit scenario has been sidelined and the latest request from opposition Labour party for new Brexit referendum, before any election.

The party supports divorce with agreement and since workable deal cannot be reached, they see new referendum as the best solution to avoid further escalation of political turmoil in Britain.

Technical studies on daily chart show mixed signals as MA’s (10/20/30/55) are in bullish configuration, but bullish momentum is fading and stochastic is in sideways mode, deeply in overbought territory.

Repeated rejection at 1.2370 Fibo barrier could increase risk of pullback, which would require verification on return below 55DMA (1.2316) and daily cloud base (1.2304). 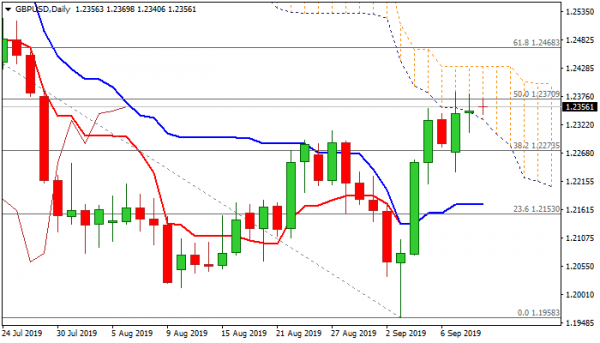