Gold bounced off the uptrend line drawn from May 30, gapping above the 21-period simple moving average (SMA) and then was halted by the 50-period SMA. The metal had consolidated around the 1488 level, which is the 23.6% Fibonacci retracement of the up leg from 1266.20 to 1556.92, after dropping from a recent seventy-seven-month high of 1556.92 on September 4.

The 100-period SMA has flattened suggesting the sideways move may extend. While also neutral, the MACD, just below the zero line is above its trigger, while the RSI is in bullish territory, flat at the 50-level. The uptrend line and the up-turn in the 21-period SMA, support the bigger positive picture, while the 50-period SMA itself, warns of a re-test of the uptrend line – filling the gap.

Overall, if the uptrend line holds, the short-term neutral-to-bullish picture could be confirmed by a move above 1535. On the other hand, only a move below 1400 could switch the bias to bearish. 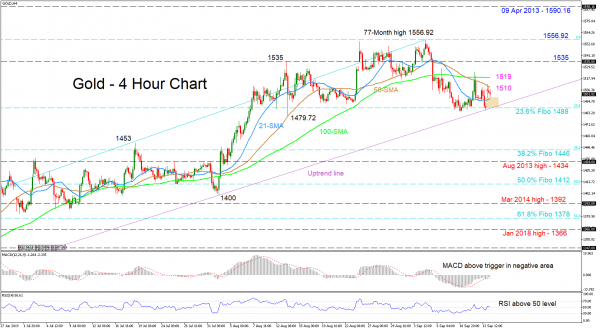