Although the market opened lower on Monday, the bullish pressure remains strong as the MACD keeps increasing momentum above its signal line and the RSI holds well above its 50 neutral level despite slowing a little bit. The Stochastics, though, have bounced back into the overbought territory, hinting that room for improvement could be limited.

Meanwhile in the medium-term picture, the downward pattern triggered from the 1.7793 peak is keeping sentiment on the negative side. That said, a determined rally above the 50% Fibonacci could signal that the worst phase of the bearish mood is over.

Summarizing, GBPCAD needs to resume positive momentum comfortably above 1.6610 to ensure the sustainability of the latest rebound. In the medium-term picture, a stronger upturn above 1.6836 is required to eliminate downside pressures. 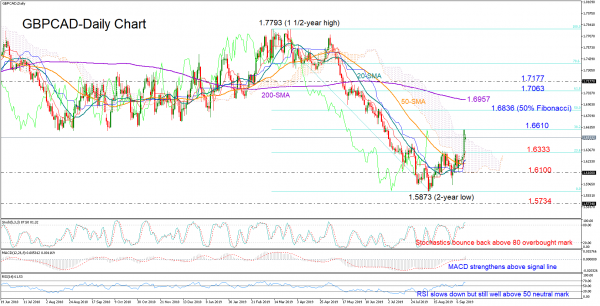