The EUR/USD pair recovered ground on Friday, to close the week pretty much unchanged right below 1.1200. It’s been the second consecutive weekly doji for the pair, with the absence of key macroeconomic drivers and rising uncertainty leaving speculative interest clueless on what’s next. Fed’s speakers were behind dollar’s late decline as St. Louis Fed President James Bullard said that the Fed can afford pausing raising rates, and wait for Washington before making next move. Indeed, Bullard is a well-known dove, but Cleveland Fed President Loretta Mester, a hawk, said that there is no "immediate need" to tighten monetary policy, although she added that considers recent slowdown in inflation is temporary. Adding to dollar’s weakness, were soft readings in new home sales up just by 2.9% in May amid rising prices, and preliminary June Markit PMIs, coming below market’s expectations, and at multi-month lows.

The week ahead has plenty of data to offer, with the US offering Durable Goods Orders a GDP revision, and more relevant, core PCE inflation, among others. In the EU, attention will center in Germany, with the IFO survey and inflation revisions leading the list. There are no Central Banks meetings or big speakers scheduled, but these lasts can surprise the market any time.

Technically, the pair has been confined to the lower half of its 5-week range of 1.1100/1.1300, building bearish pressure, but held ground, amid lack of dollar’s demand. The daily chart shows that the pair found buying interest around the 23.6% retracement of its latest bullish run around 1.1125, with a previous relevant low having been set at 1.1109, making of the area a critical support to break to confirm additional declines ahead. In the same chart, the price was unable to advance beyond a horizontal 20 DMA, the immediate resistance, whilst technical indicators have managed to turn higher within neutral territory, lacking momentum. In the 4 hours chart, the 20 and 200 SMAs converge around 1.1160, reinforcing a static support area, whilst technical indicators eased modestly within positive territory. Overall, the downside potential seems limited, despite diminishing EUR’s buying interest. 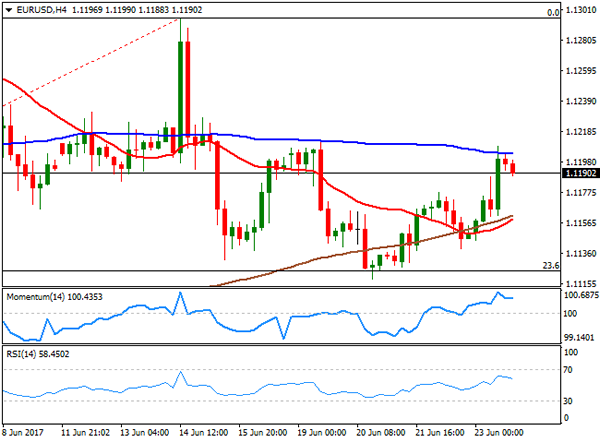 The USD/JPY pair closed the week higher at 111.26, although with a third consecutive doji on Friday, as investors struggled to find a driver. Soft US data released on Friday offset early Fed’s speakers hawkish stance, while a worse-than-expected manufacturing index in Japan prevented the JPY from appreciating, as the Nikkei Flash Japan PMI fell to a seven-month low of 52.0 in June from 53.1 in May, also missing expectations of 53.4. Japan will release its May inflation data next Thursday, expected modesty higher. Despite the BOJ has said that it plans to maintain its accommodative policy, higher inflation may trigger speculation of retrieving easing sooner than expected. In the meantime, the daily chart shows that the price met selling interest on approaches to the 100 DMA, currently converging with the 50% retracement of the latest daily slide around 112.00, while technical indicators head nowhere, but remain within positive territory. Shorter term, the 4 hours chart presents a neutral-to-bearish stance, with the price stuck around a modestly bearish 200 SMA, and technical indicators heading marginally lower around their mid-lines. A critical support comes at 110.90, the 38.2% retracement of the mentioned rally, with a break below it favoring a bearish extension towards the 110.00 region. 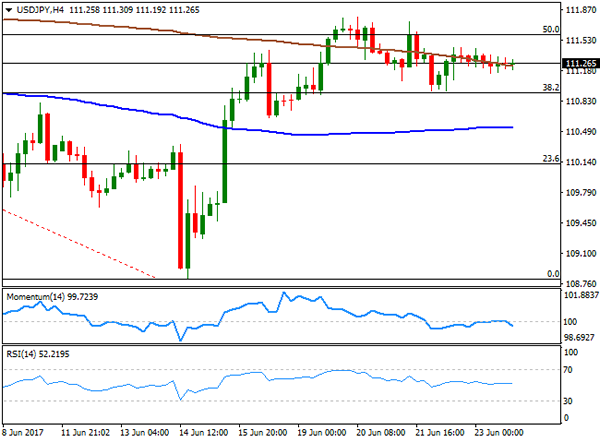 The GBP/USD pair closed up for a third consecutive day on Friday at 1.2715, still down for the week. Theresa May has been unable to form a government so far, raising concerns over her ability to retain the UK’s leadership, with news indicating the DUP is not ready to support her sending the pair to a two months low of 1.2588 mid-week. The rally was reverted by BOE’s Haldane, who said he could vote for a rate hike in the next meeting, after voting to keep them on hold the last one. That will mean that at least half of the MPC is ready to tighten amid rising inflation, against Governor’s Carney call for patient. On Friday, the kingdom released its CBI Industrial Trends Survey, up to 16, its highest since 1988, indicating strength in the manufacturing sector and partially helping to neutralize political concerns. Technically, the risk remains towards the downside, given that in the daily chart, the price remains below a strongly bearish 20 SMA now at 1.2785, whilst the Momentum indicator remains flat within negative territory and the RSI indicator heads marginally higher around 43. In the 4 hours chart, the price is above a modestly bullish 20 SMA, while technical indicators retreat within positive territory, not enough to confirm a bearish move ahead. 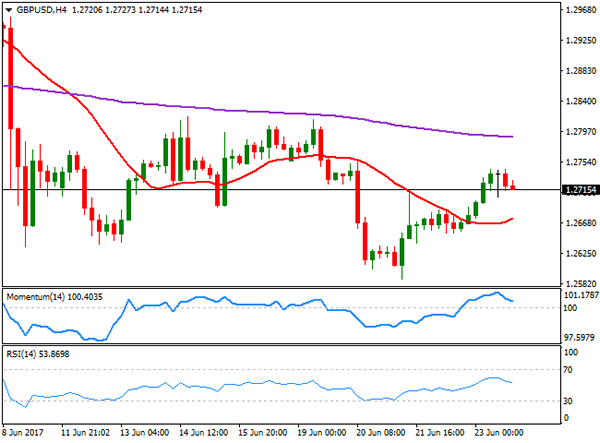 Spot gold trimmed all of its early losses and closed the week with modest gains at $1,256.72 a troy ounce amid lackluster dollar’s performance, and uncertainty over the upcoming Fed’s move. Despite softening inflation in the US, monetary policymakers have been sending mixed signals over next move, most supporting further hikes ahead, in spite of poor data. Markets are not yet convinced over another hike in the current macroeconomic environment, and weakening equities helped gold to bounce. In the daily chart, the price has settled above a flat 100 DMA, but still trades below a modestly bearish 20 DMA, this last at 1,265.01, whilst technical indicators have managed to bounce from near oversold levels, heading higher, but still well-below their mid-lines. In the 4 hours chart the commodity presents a bullish stance, with technical indicators resuming their advances within positive territory and the price firmly above a bullish 20 SMA. The 200 SMA caps the upside, providing an immediate resistance at 1,258.00. 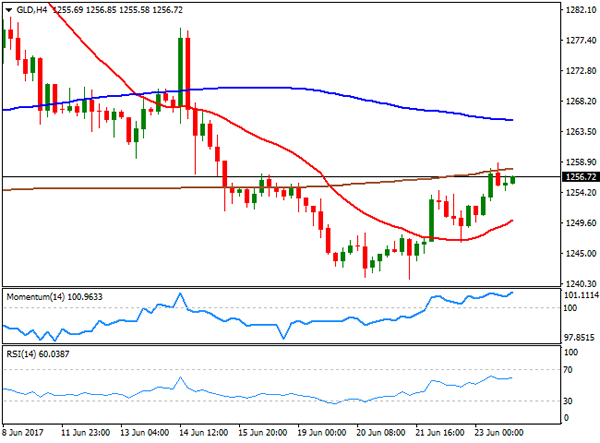 West Texas Intermediate crude oil futures closed in the red for a fifth consecutive week and at its lowest since November 2016, when the OPEC announced its output cut deal. WTI traded as low as 42.04 before bouncing modestly to settle at $43.11 a barrel on Friday. The commodity was weighed by rising concerns of a worldwide glut, on news production increased in different productive countries. Within the OPEC, Libya and Nigeria rose their output, both countries exempt from the cut, while in the US, the Baker Hughes report released on Friday showed that the number of active rigs drilling for oil rose by 11 to 758 this past week, marking a 23nd consecutive weekly advance. In the daily chart, the latest recovery looks merely corrective, given that the price remains far below all of its moving averages, with the 20 SMA heading sharply lower, now around 45.60, the RSI indicator aiming higher but still in oversold territory, and the Momentum also heading north, but well-below its mid-line. In the 4 hours chart, technical indicators have managed to correct oversold conditions, but lost upward strength and turned flat below their mid-lines, whilst the price is stuck around a bearish 20 SMA, in line with the longer term perspective. 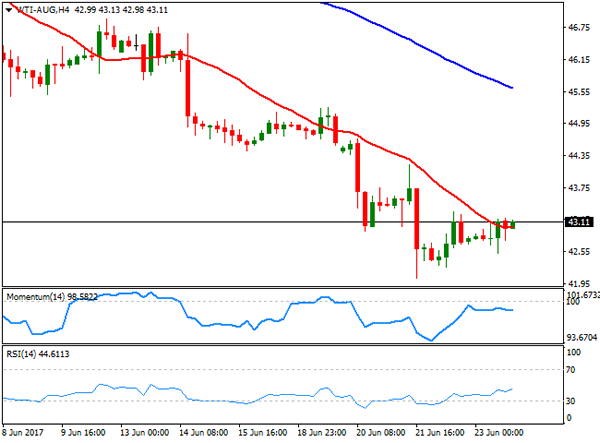 Wall Street closed mixed on Friday, with the DJIA down 2 points to 21,394.76, but the Nasdaq Composite up 0.46%, to 6,265.25, and the S&P also in the green, up by 4 points to 2,438.30. US indexes closed the week with small gains, with tech and energy-related equities on the rise. Back stocks, on the other hand, were undermined by a flattening yield curve. Within the Dow, Visa led advancers with a 1.73% gain, followed by Boeing that added 1.40%. Home Depot shed 2.68% being the worst performer, followed by Goldman Sachs that shed 1.17%. The daily chart for the DJIA shows that the index held above a still bullish 20 SMA, currently at 21,294, whilst technical indicators kept retreating within positive territory, although with limited downward momentum. In the 4 hours chart, the benchmark is below a bearish 20 SMA, whilst the Momentum indicator heads nowhere below its 100 level, as the RSI indicator heads lower around 41, all of which favors a downward extension on a break below the mentioned support. 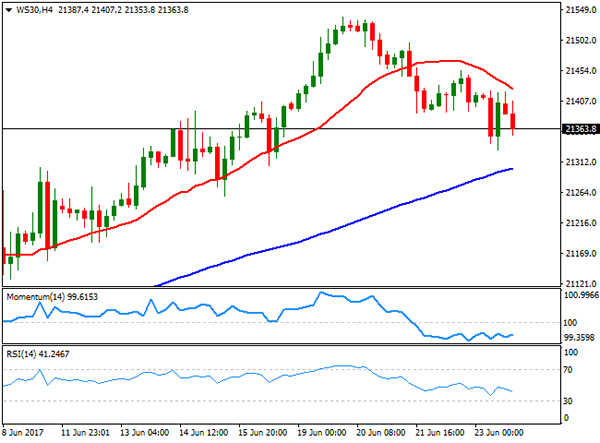 The FTSE 100 shed 15 points on Friday to end at 7,424.13, down for a third consecutive week. A stronger Pound weighed on the Footsie, alongside with oil prices, as despite bouncing modestly at the end of the week, the commodity settled at a multi-month low. The best performer was ITV, up 3.34% after receiving a rating upgrade from Morgan Stanley, from equal-weight to overweight, followed by Fresnillo that added 2.88%. Smurfit Kappa led decliners with a 2.48% loss, followed by Shire that shed 2.32%. In the daily chart, the index is still trading above a bullish 100 DMA, currently at 7,380, but the 20 DMA gains bearish strength above the current level, whilst technical indicators lack directional strength within bearish territory, leaning the scale towards the downside. In the 4 hours chart, the London benchmark presents a bearish stance, with the 20 SMA presenting a strong downward slope and capping advances around 7,440, and technical indicators having turned south after failing to overcome their mid-lines. 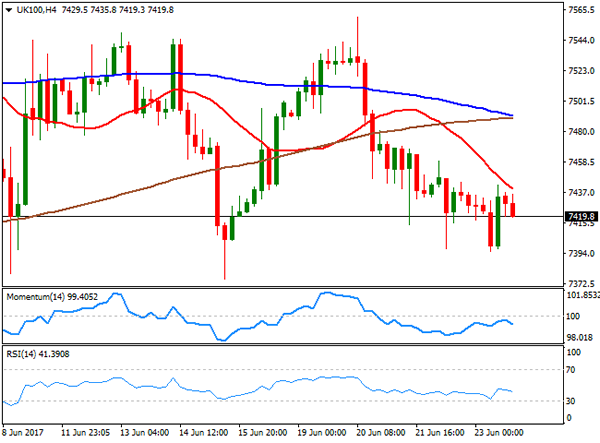 The German DAX closed the week lower, down on Friday by 60 points, to 12,733.41. Most major European indexes closed lower in the last day of the week, amid a decline in healthcare and utilities stocks. Within the German benchmark, only five components closed in the green, with Deutsche Lufthansa leading the winners’ list with a 1.04% gain, followed by Vonovia that added 0.39%. RWE AG was the worst performer, down 2.49%, followed by E.ON that shed 1.29%. Banks and carmakers were also trading heavily across the region. In the daily chart, the index has settled right below a modestly bullish 20 SMA, whilst technical indicators turned lower within neutral territory, with the Momentum limited, but the RSI gaining downward traction around 48, this last anticipating some further slides ahead. In the 4 hours chart, the index closed below all of its moving averages, with the 20 SMA crossing below the 100 SMA far above the current level, and technical indicators having turned south within negative territory, also supporting additional declines ahead. 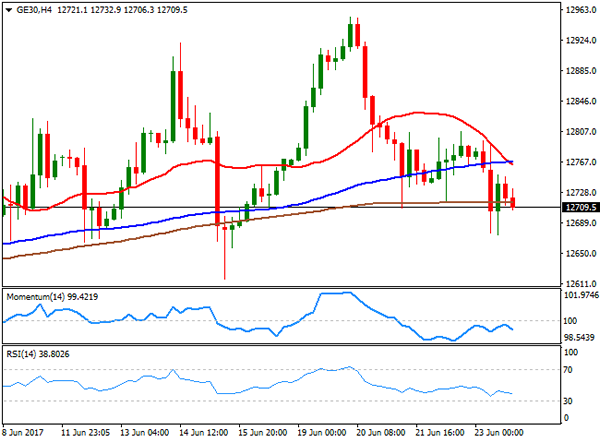