The EUR/USD pair began rallying early European session, and continues to do so ahead of Wall Street’s opening, as the market finally got the excuses needed to move. The common currency got a considerable boost from ECB’s head, Mario Draghi, in the European morning, resulting in the EUR/USD pair reaching a fresh 2017 high of 1.1304, accelerating further in the US afternoon and flirting with 1.1350 after Fed’s officers hit the wires, its highest since August 2017.

In a speech at an ECB forum on Central Banking, Draghi offered a confident stance on the economic progress of the region, saying that "all the signs now point to a strengthening and broadening recovery in the euro area," but also reaffirmed the need of maintaining QE in place, although hinted the possibility of a sooner-than-expected tapering, noting that the threat of deflation is gone.

In the US, Fed’s Harker supported the decision to raise interest rates again this year, even though he predicts prices will take longer to rebound to the Fed’s goal revising his prediction on when inflation will reach the 2% target to early 2018 from late this year. Chair´s Yellen has also been on the wires, but her comments were focused on the strength of the banking system, hitting the greenback by reckoning that real income has been stagnant, hurting mostly the middle class.

Technically, the pair is up for over 150 pips daily basis, leaving intraday indicators in extreme overbought territory, but there no signs of upward exhaustion just yet, and given that the pair broke above 1.1300, further gains are likely for the upcoming sessions as long as pullbacks towards the level attract buying interest. In the 4 hours chart, technical indicators have decelerated, but maintain their bullish slopes within overbought territory, with the RSI indicator currently at 80, while far beyond the current level, the 20 SMA accelerated north, crossing above the 100 SMA, another sign of the dominant bullish momentum. 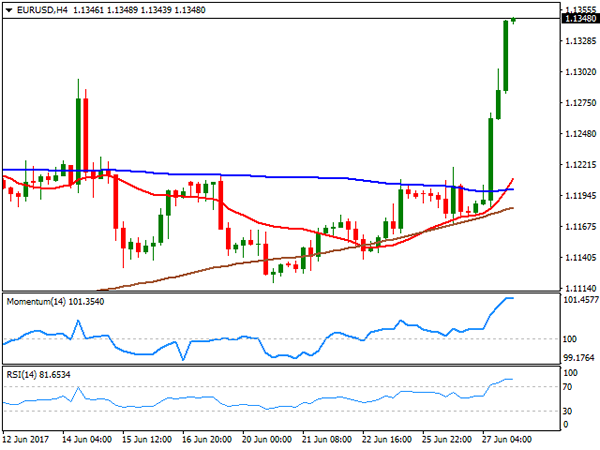 The USD/JPY pair rallied up to 112.46, its highest in over a month, as bonds came under pressure worldwide following Draghi’s hawkish comments early London, indicating that things are improving in the region and hinting somehow that QE may come to an end sooner than expected. US Treasury yields jumped to their highest in nearly two weeks, with the US 10-year note benchmark up to 2.20% from previous 2.14%. Japan won’t release any macroeconomic reading during the upcoming session, with the pair therefore set to keep following yields, and sentiment. The pair retreated from the mentioned high, but settled above the 112.00 mark, presenting a moderate upward tone by the end of the US session, given that the 4 hours chart shows that the price continues developing above its 100 and 200 SMAs, but also that technical indicators are beginning to retreat after nearing overbought levels. The immediate support comes at 112.00, the 38.2% retracement of its April/May bullish run, and the positive tone will persists as long as the level contains intraday declines. Below it, however, the risk will turn clearly towards the downside. 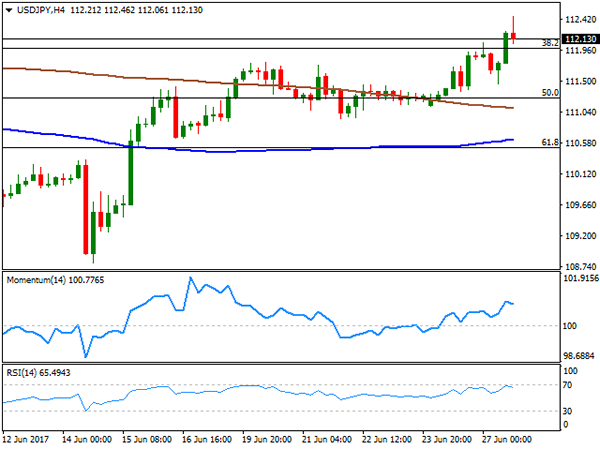 The GBP/USD pair jumped up to 1.2860 by the end of the US session, triggering stops past 1.2820 and backed by comments from BOE’s Carney earlier on the day and broad dollar’s weakness. Following the release of the UK Financial Stability report, Carney offered a press conference, announcing that the Central Bank will raise banks’ required capital buffer from 0.5% to 1.0% in November, but the report was overall positive about local conditions, assessing the overall risks from the domestic environment to be at a "standard level." The strong rally in the EUR/GBP cross limited Pound gains, alongside with Brexit jitters, always pending in the background. Anyway, the pair is technically bullish according to the 4 hours chart, with the price having bounced again earlier on the day from a bullish 20 SMA, now crossing above its 200 EMA for the first time since the election on June 8th. In the same chart, technical indicators head higher within positive territory, with the RSI indicator nearing overbought levels, in line with further gains ahead. The pair has multiple intraday highs in the 1.2810/20 region, now the immediate support, with scope now to test 1.2900, should the level contain declines. 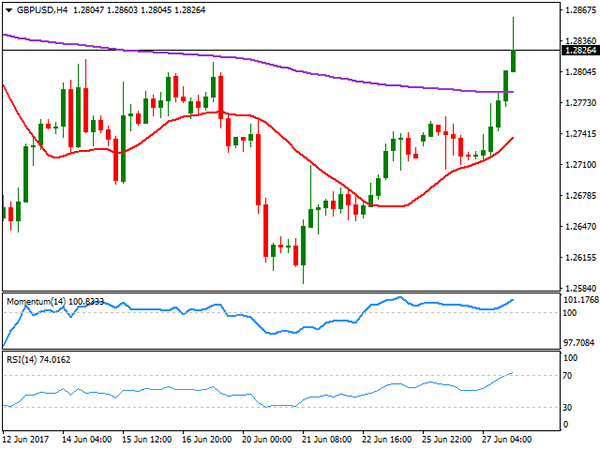 Gold recovered some ground this Tuesday with spot setting at $1,250.00 a troy ounce, nearly trimming all of its Monday’s losses. The bright metal found support in dollar’s weakness, fueled by comments from Fed’s officers, sounding far less confident over inflation developments, rising doubts over the Central Bank’s ability to maintain its tightening path. After plummeting to a fresh one-month low on a what many suspect a "fat finger" on Monday, the recovery is not yet enough to confirm additional strength ahead, given that in the daily chart, the price was unable to advance beyond its 100 DMA, while a bearish 20 DMA keeps heading south above the largest. Technical indicators in the mentioned chart have managed to recover, heading higher but still hold within bearish territory. Shorter term, the 4 hours chart shows that the price struggles right below a flat 20 SMA, with the 100 and 200 SMAs far above the current level, and technical indicators lacking directional strength, and holding right below their mid-lines, leaning the scale towards the downside, particularly on a break below 1,245.50, the immediate support. 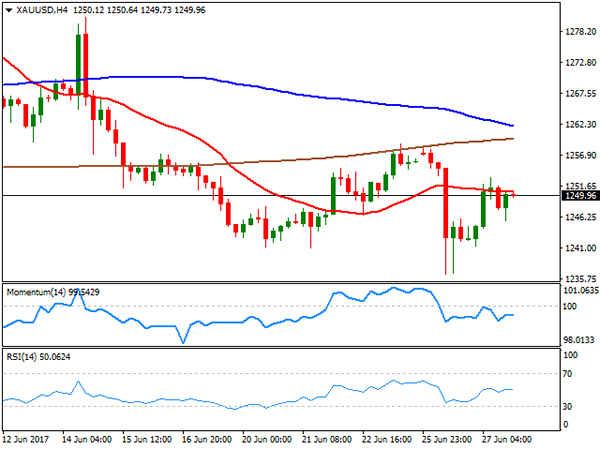 West Texas Intermediate crude futures closed the day at $44.30 a barrel, with oil prices up on the back of dollar’s broad weakness. The absence of oil market’s news helped prices recover, although the movement seems still corrective, and the commodity at risk of falling further amid fears of a global glut. Ahead of US stockpiles reports, the daily chart for WTI shows that the price remains below a sharply bearish 20 DMA, offering a dynamic resistance at 44.90, while the Momentum indicator consolidates below its 100 level and the RSI indicator heads north around 40, indicating limited buying interest. In the 4 hours chart, the price managed to advance beyond a now modestly bullish 20 SMA, but a sharply bearish 100 SMA stands also around 44.90, reinforcing the resistance level, while technical indicators have lost upward strength, now consolidating within positive territory. 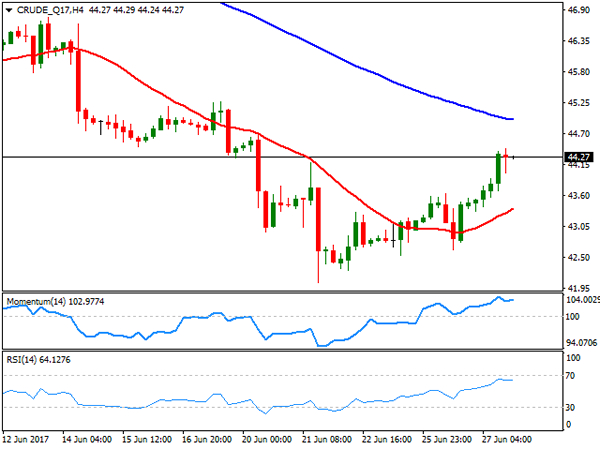 Wall Street closed in the red, undermined by a sell-off in the tech sector, and news that the US Senate decided to delay the new health care bill vote until after the July 4th holiday. Further affecting equities was a cyber attack to multiple international firms. The Dow Jones Industrial Average shed 99 points, to end at 21,310.66, while the Nasdaq Composite plunged 100 points, to 6,146.62. Losses in the S&P were moderated, as the index settled at 2,41.38, down by 19 points. Within the Dow, only 4 members closed higher, led by JPMorgan Chase, up 1.02%, and followed by Wall Mart which gained .81%, Verizon Communications was the worst performer, down 1.91%, followed by Microsoft that shed 1.67%. The daily chart for the DJIA shows that the index stands right above its 20 DMA, pressuring it for the first time this month, whilst technical indicators turned lower, but remain within positive territory. In the 4 hours chart, the index is below a bearish 20 SMA, but held above a bullish 100 SMA, whilst technical indicators entered bearish territory, but present a limited bearish strength. 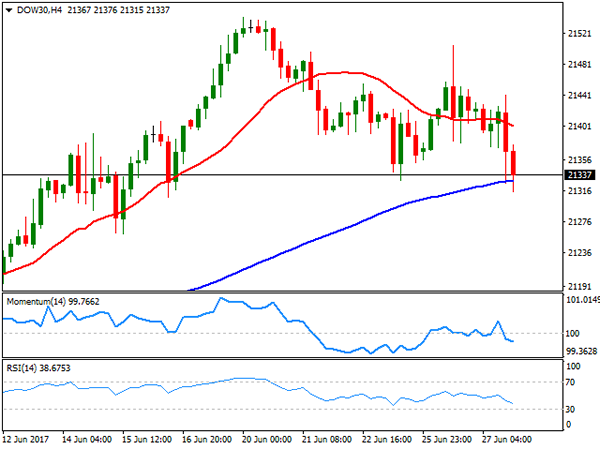 The FTSE 100 closed the day down 12 points, at 7,434.36, with retailers leading the decline, after a profit warning from Debenhams, a local department store that said its full-year profit could come at the lower end of expectations. A sharp advance in the mining sector, however, limited the decline. The Pound jumped higher after London’s close, leading the index further lower in electronic trading, now around 7,403. Glencore led advancers, up 3.73%, followed by Rio Tinto, Anglo American and Antofagasta, all up by over 3.0% GKN was the worst performer, down 4.31%, followed by Admiral Group that shed 2.25%. From a technical point of view, the daily chart shows that the index remained well below a bearish 20 DMA, whilst technical indicators turned south within negative territory, favoring a downward extension for this Wednesday. Shorter term, the 4 hours chart shows that a bearish 20 SMA contained advances, whilst technical indicators also turned lower within bearish territory, with the RSI currently at 38, in line with the longer term perspective. 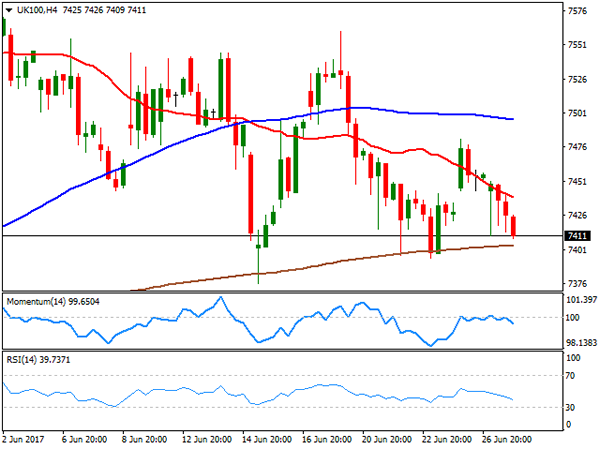 The German DAX closed the day at 12,671.02, down 99 points or 0.78%, as European equities edged lower following Draghi’s hawkish speech that sent the EUR higher against all of its major rivals. Adding to the negative tone of regional equities were concerns over profits, with the automotive sector undermined by General Motors, as the company lowered its outlook for new sales in 2017. Within the DAX, only three members closed with gains, with Commerzbank that advanced 4.02% and Deutsche Bank, which gained 2.55% topping winners list amid Italian’s banks rescue earlier in the week bringing confidence to the sector. Continental was the worst performer, down 3.70%, followed by E.ON that shed 3.68%. The German index fell further in after-hours trading, following the lead of Wall Street, heading into Wednesday opening right below 12,600, its lowest for this month. The daily chart shows that the index fell and stands well below its 20 DMA, whilst technical indicators are gaining bearish traction, the Momentum around its mid-line but the RSI around 44, this last favoring additional slides ahead. In the 4 hours chart, the index is now below its 200 SMA, having broken below the 20 and 100 SMA earlier on the week and with technical indicators heading sharply lower within bearish territory, maintaining their bearish slopes near oversold territory. 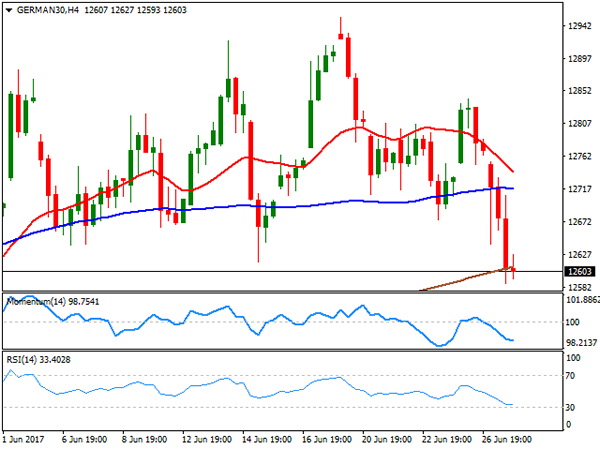