GBPCAD is pushing above a key resistance of 1.7133 from the swing high from May 29. The ascent, which commenced on August 9, is aided by the progressing bullish cross of the 50-day simple moving average (SMA) and the improving positive momentum in the technical indicators.

The short-term oscillators suggest that positive directional momentum is increasing as do the slopes of the 50- and 100-day SMAs. The MACD, in the positive zone, has moved back above its red trigger line, while the RSI is sloping upwards currently at the 70 level. However, the Stochastics are marginally in the overbought territory warning of a pullback.

In brief, a short-term neutral-to-bullish bias holds above the 200-day SMA and a definitive close above 1.7133 would strengthen it. 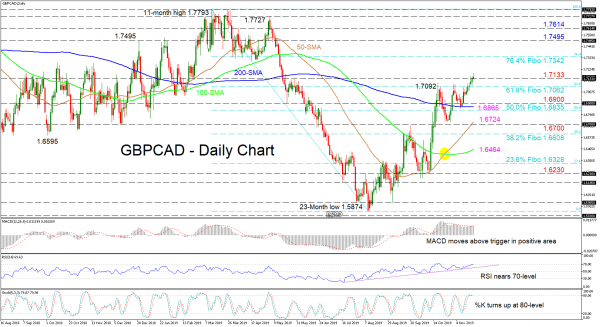 US Dollar Retreats On Equity Rally