WTI oil futures for January delivery closed above the 200-period moving average (SMA) on the four-hour chart on Wednesday and spiked to a one-month high of 58.64, confirming a new higher low at 54.84.

The price is currently consolidating around 58.60, this being the 61.8% Fibonacci of the 63.22-50.98 downleg, which is expected to challenge the bulls in the short-term as the RSI and the Stochastics flag overbought conditions – a sign that positive momentum may soften.

A downside reversal is expected to initially stall near the 57.80 former resistance level and then at the crossroads of the 50% Fibonacci of 57.14 and the upper surface of the Ichimoku cloud. Falling lower, traders will be interested to see whether the market can rebound somewhere between the 38.2% Fibonacci of 55.68 and the 200-period SMA. Failure to hold above the latter would bring a stronger obstacle around the 23.6% Fibonacci of 53.90 into view if the previous low of 54.84 is breached too.

In the positive scenario, if the 61.8% Fibonacci of 58.60 fails to defend against the bulls the 59.26 number that pressured upside corrections in mid-September could take over ahead of the 60.00 mark.

In the bigger picture, although the market is in a sideways move within the 63.22 and 50.98 boundaries, the bullish cross of the 50-period SMA with the 200-period SMA increases hopes that the outlook may improve. 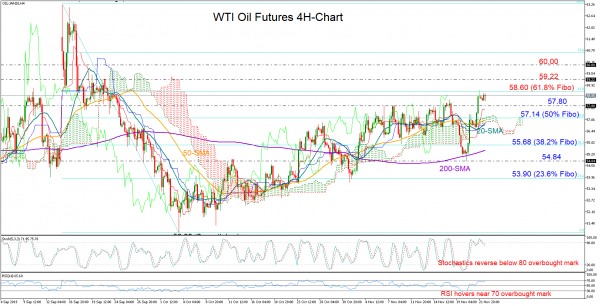 Crude Oil: Oil Trading On A Weaker Footing This Morning

Market Morning Briefing: Pound Continues To Trade Near Support At 1.30

Oil Gains On Disruptions In Libya, US Closed