GBPAUD stretched to a fresh 3 ½-year high of 1.9150 on Friday ahead of the Reserve Bank of Australia policy meeting early on Tuesday. The bullish action could take a breather in the short-term according to the RSI which is pointing towards its 50 neutral mark. The MACD, which looks ready to cross under its red signal line, backs this view as well.

The 1.8880 mark could immediately curb any potential downside correction and deter the price from sliding towards 1.8720, which was a key support and resistance region in previous sessions. Beneath the latter, the selling pressure could pause near the November low of 1.8545, a break of which could open the door for the 1.8400 number.

Should the bulls take control instead, driving the price above the 3 ½-year high of 1.9150, traders could search for resistance somewhere near 1.9300 and then higher around 1.9850.

In the bigger picture, GBPAUD has turned slightly positive following the close above 1.8880. A drop under this mark would resume the sideways move in the market.

Summarizing, GBPAUD could trade in a neutral manner in the short-term, while in the bigger picture a decline under 1.8880 is required to bring the neutral outlook back into play. 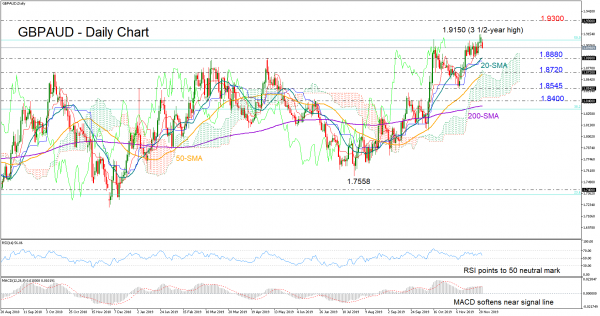