The RBA said it will continue to monitor the situation and estimate the impact of earlier easing before taking further steps.

Markets now turn focus towards tomorrow’s release of Australia’s Q3 GDP which will provide more information about the performance of the economy. The pair is up 0.44% since the start of Asian session today and looking for further advance as bullish signals were generated on Monday’s surge through thin daily cloud and today’s extension through cracked Fibo 38.2% of 0.6929/0.6754 (0.6821) and 50% retracement, reinforced by daily Kijun-sen (0.6841).

Daily momentum broke into positive territory, RSI and stochastic are in steep ascend and support the advance.

Caution on strongly overbought 4-hr studies which suggest bulls may take a breather before resuming, but so far without clearer signals. 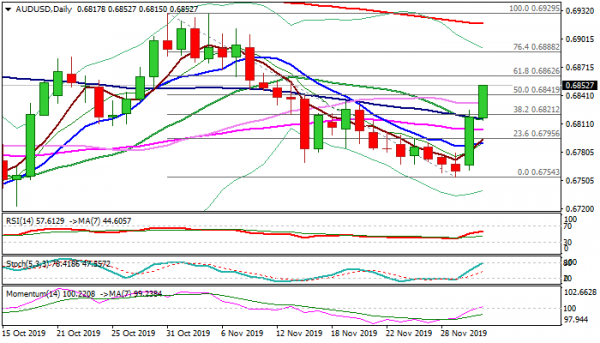 GBP/USD Outlook: The Pair Moved Into A Positive Zone And Is Currently Correcting Lower